Refreshing and spontaneous approach by brothers on the same wavelength 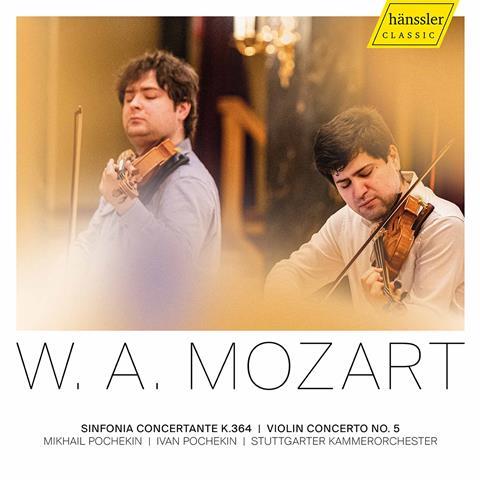 Description: Refreshing and spontaneous approach by brothers on the same wavelength

Having followed parallel paths since their childhood – they both studied with, among others, Rainer Schmidt and Viktor Tretiakov – the Russian brothers Mikhail and Ivan Pochekin now find themselves on exactly the same musical wavelength both technically and interpretatively. Their reading of Mozart’s Sinfonia concertante exudes a delicious spontaneity, the two players consistently striking sparks off each other. They take some liberties with the printed text that can come across as either refreshing or irritating according to one’s attitude towards urtext matters: slur patterns are occasionally modified, and the odd unscripted trill or frill added. Mozart is known to have spontaneously embellished his own music, so I’m not complaining!

Mikhail Pochekin contributes a somewhat mannered reading of the A major Concerto. He allows himself a few ungainly bulges in sustained notes, and his fussy phrasing in the Adagio fails to convince. On the other hand, his choice of some stylish cadenzas by the experienced Mozartian scholar, Robert Levin – once championed by Gidon Kremer – is an inspired alternative to the usual ones by Joseph Joachim. The recording was made in the generous acoustic of the Ludwigsburg Musikhalle, which – together with a balance that places the soloists decidedly upfront – masks some orchestral detail. However, the enthusiastic support of the conductorless Stuttgart Chamber Orchestra comes across emphatically.