Classic quartet programme to celebrate the birthday of a refined ensemble 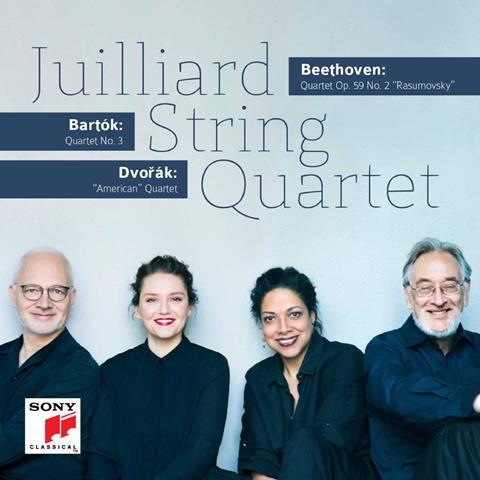 Description: Classic quartet programme to celebrate the birthday of a refined ensemble

Ever the bastion of tradition in the face of changing musical priorities, the Juilliard Quartet (JSQ) celebrates its 75th birthday with a disc that could barely be more of a string quartet programming cliché: something Classical, something ‘modern’, something Romantic. And there’s also a sense of homage to one of the eponymous music school’s founding fathers, Franz Kneisel, and his aim to transfer European tradition to America in the inclusion of a Dvořák quartet he premiered, alongside composers who have been at the heart of the JSQ story since the beginning, Beethoven and Bartók.

For all this, there is none of the ‘schlamperei’, or sloppiness, that Mahler attributed to tradition about the playing itself. Made in May 2019, this is the quartet’s first recording with its newest recruit, violinist Areta Zhulla, and she sounds fully integrated within a finely honed ensemble. Beethoven’s second ‘Rasumovsky’ Quartet emerges fresh-faced, especially in its sunnier passages, and there’s plenty of bounce to the Allegretto and perky vigour in the finale.

The players’ emphasis on refinement perhaps robs Bartók’s Third Quartet of some its raw gutsiness, but it’s given a fizzing performance nonetheless. And finally, Dvořák’s ‘American’ Quartet brings out the Romantic warmth of the JSQ’s string sound, which remains untroubled by the sprung rhythms and the general exuberance of the playing, not least in the joyous finale.