Carlos Maria Solare attends a series of perofrmances at the Reiss-Engelhorn Museum, Mannheim, on 6–7 May 2022 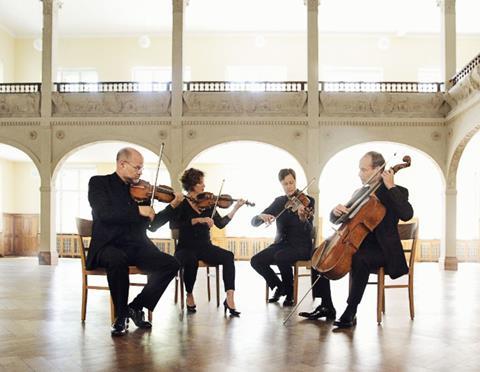 Now approaching its 40th anniversary, the Mandelring Quartet (below) has developed a penchant for performing composers’ complete string quartets in concentrated form: I fondly remember a Shostakovich bash held over a weekend and a Mendelssohn marathon that unfolded over one long afternoon. On this occasion, the ensemble – based in nearby Neustadt an der Weinstrasse – came to Mannheim to celebrate Brahms’s birthday (7 May) by playing his complete chamber music for strings in three concerts spread over two days.

Listening to Brahms’s three string quartets in one sitting constitutes a rather generous helping of ‘meat and potatoes’ (as William Primrose said in another context), but it also forcefully drives home to the attentive listener the care lavished by the composer when creating the pair of pieces that make up his op.51, both of them in the minor mode but of fascinatingly contrasting hues. The tragic drama of the C minor and the melancholic lyricism of the A minor were ideally caught by the Mandelring players. The ensemble produced an earthy tone well suited the composer’s sound world – the ‘horn’ 5ths that open the First Quartet’s Romance and the melody that soars over them were an eloquent case in point. The wistful atmosphere that pervades the Second Quartet was convincingly captured, particularly the stylised Quasi minuetto third movement, with its nicely contrasting, Mendelssohnian interludes. Brahms’s Third Quartet op.67, finds him in neo-Classical mood, all but quoting Mozart’s ‘Hunt’ Quartet at the beginning. The Mandelring found a lighter touch here, with swinging syncopations and sweeping semiquaver runs in the first movement, followed by a warmer tonal quality in the Andante. The last two movements place the viola in the limelight, and Andreas Willwohl rose to the occasion with subtly varied phrasing.

The following afternoon saw former Mandelring violist Roland Glassl in a return visit for the two string quintets. His forceful musical personality was already clearly present as second viola in op.88 but came undisputedly to the fore when he switched to the first part for op.111, a piece that powerfully demonstrates Brahms’s love for the instrument: the opening movement’s second subject, scored for the two violas in cooing 6ths, was imbued with yearning beauty, maximising the contrast with cellist Bernhard Schmidt’s heroic opening. This movement – one of Brahms’s most elaborate sonata forms – showcased the Mandelring’s individual timbres particularly effectively. Leader Sebastian Schmidt’s silvery sound was well set off by second violin Nanette Schmidt’s nut-brown tone, much to the advantage of every one of the phrases that Brahms has them share.

When cellist Isang Enders joined the group for Brahms’s two string sextets at the evening concert, another strong personality was clear as he took over the first cello in op.18, shaping the opening solo with finely chiselled tone and sophisticated articulation. Willwohl gratefully seized the faux-Baroque viola solo that launches the second movement, which developed a dizzying momentum throughout the numerous variations before calming down for the major mode ending. The undulating figure that permeates the opening movement of op.36 was launched by Glassl with unerring bow control. Sebastian Schmidt captured the Scherzo’s bittersweet quality convincingly, the players letting their hair down for its syncopated central section. The slow movement’s fugato was forcefully characterised, and the whirlwind finale brought the Mandelring’s Brahmsian odyssey to a triumphant conclusion.