How to shift smoothly and cleanly by cellist Jeffrey Solow

When it comes to shifting, the American cellist and Boyer College professor gets his inspiration from the physics of ball games in this 2007 article 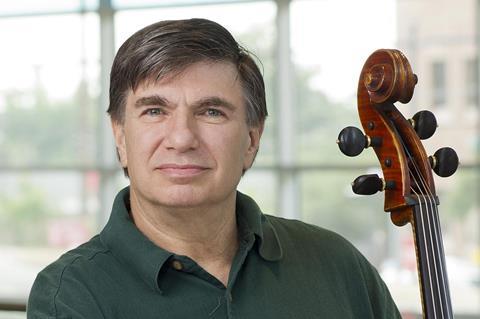 Shifting between positions is about applying pressure, releasing it and then reapplying it in another spot. (In contrast, when it comes to playing in a single position, I transfer weight smoothly from one finger to another without releasing it.) Preparing for a shift, I use only enough pressure to depress the string and to create sufficient friction to prevent my finger from sliding up and down during vibrato.

To find this ideal, I take notice of the weight of each part of my left arm – hand, forearm and upper arm – and use only what I need. For example, sitting at the cello in playing position, with my forearm and upper arm suspended, my hand weight would make my hand fall on the fingerboard if I let it drop. My hand weight alone is only enough to play a harmonic. If I stack the weight of my forearm on top of this, I have sufficient weight to hold down and vibrate a solid note, and this is adequate for most playing. If I use a very intense vibrato or if I am playing at the end of the fingerboard, I may need to add my upper arm weight.

For most playing I stack the weight, but when shifting I suspend my forearm and upper arm weight and then reapply them when I arrive at the new note. There is not enough weight to press down on the string during the shift, so at that moment I feel like I’m playing a harmonic. Shifting is the left-hand equivalent of bowing, though in a shift I want weight at the beginning and end of the motion, but much less in the middle. With bowing, the force applied to the string should essentially be constant.

Shifts also involve moving from one balance point to another. According to the German cellist and pedagogue Gerhard Mantel, 'large mass proceeds small mass’. We have two interlocking systems of balance: the larger one is defined by the fingertip, head–torso (the head balanced on the torso) and pelvis; the smaller one is the fingertip, elbow and shoulder. For a long shift to the top of the fingerboard, my head and torso fall forwards before my arm moves towards the new note.

When my hand and finger arrive, they unite with the balance that has already been established by my head–torso. When shifting from a high position to first position, my head and body sit back and my arm, and then my finger, land on the note.

But there is more to shifting than simply falling forward or sitting up – I also have to do something to get my arm, hand and finger moving. Try this experiment. Toss a ball straight up into the air. If your motion was smooth, you would have dropped your arm before you tossed the ball. Without such a preliminary drop, you would have had to jerk your arm up to get it moving.

Read: How to shift correctly on the violin

Read: 8 ways to teach cello students how to shift confidently

What kept your arm in the air before the toss? Muscles. What did you do to make the toss? You let go of your muscles, and gravity pulled your arm down. Then you re-engaged your muscles and made your arm go up. Dropping the arm before throwing allows us to control the toss more easily. This is another Mantel principle: 'Mass in motion is easier to control than mass at rest.’

Take the exercise further and toss the ball to your other hand. If you start by dropping your hand as in the previous exercise, you can produce a sideways motion by making an overhand circle. The hand then gains speed more smoothly and the accuracy of the toss is easier to control. In a circular toss, the vertical and horizontal elements of the ball’s motion combine into a parabolic arc.

How do we apply this to shifting on the cello? If, for example, I am playing a low note on the A string, I maintain enough weight on my playing finger for it to stay in the one place as I vibrate. As my body falls forwards to prepare for the shift, my left arm drops to start its clockwise toss into a parabolic arc. My arm, which is moving faster than my body, is in freefall and I can release the weight from the string. When the smaller system of balance of my arm unites with the larger system of balance of my head–torso, I have arrived at the new note and I restore the weight.

To practise shifts, I focus more on getting the process right than hitting the correct note: the launch is the important part. If my shift comes up short, I ’toss’ it higher to keep it in the air longer, or increase the speed to cover more distance in the same amount of time. Consistency comes through refining ‘choreography’ of position, as well as timing and balance.

This article was first published in The Strad's June 2007 issue.

Read: 10 tips for improving your scales

Read: Opinion: The power of imagination