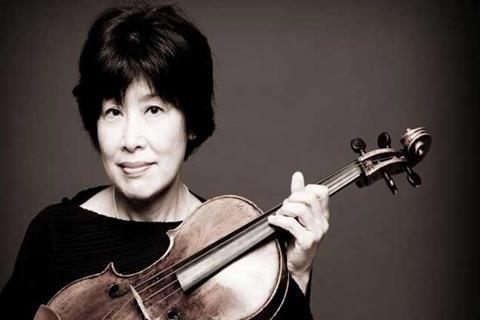 Japanese violist Nobuko Imai started to learn the violin at the age of six and attended the Toho School in Tokyo at the age of 15 to study with Toshiya Eto. Here Imai took up the viola as a second instrument and developed a strong affinity with it based on the instrument's rich timbre. She later studied at the Juilliard School where she cites the legendary violist Walter Trampler as a seminal figure in her musical education. Imai soon developed a reputation for her creative approach to musicianship, adapting cello works for the viola and promoting contemporary music. She currently performs as a soloist with the world's major orchestras, including the English Chamber Orchestra, the London Symphony Orchestra and the Dallas Symphony Orchestra. She has also enjoyed a successful chamber music career, first with the Vermeer Quartet and subsequently as a founding member of the Michelangelo Quartet in 2008. As a pedagogue, Imai founded the East West Baroque Academy in 2000 and currently teaches at the Conservatory of Amsterdam, the Conservatoire Supérieur et Académie de Musique Tibor Varga in Sion, Switzerland and the Conservatoire Supérieur de Musique de Genève in Geneva. In 1996 she was awarded the Suntory Hall Prize, the leading Japanese prize for music. Since 1988 Imai has played on a 1690 Andrea Guarneri.