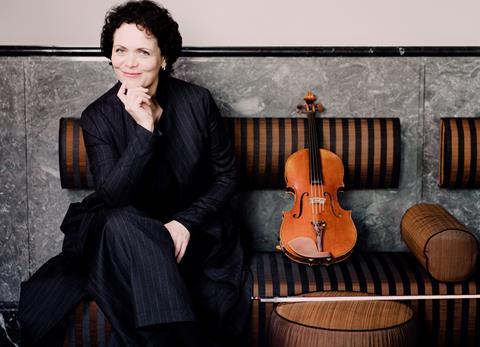 Tabea Zimmermann has become the third woman to be awarded the international Ernst von Siemens Music Prize. The award, which comes with a €250,000 cash endowment, is made to a composer, performer, or scholar ‘who has made outstanding contributions to the world of music’. Last year the British composer Rebecca Saunders became the first female composer to win the prize, and violinist Anne-Sophie Mutter was the first female recipient in 2008.

Announcing the news, the board of the Foundation described Zimmermann as ‘one of the greatest performers of her era [who] has managed to bring the qualities of the viola into the consciousness of the contemporary music world.

‘The Foundation has decided to highlight the work of an artist who has put all of her energy into the very core of musical life, sharing this with her audience,’ the Foundation continues. ‘Through her deep musical understanding and her love of music, which she expresses with indescribable enthusiasm, she has used her viola to help shape the musical landscape in a most impressive manner. This prize thus honours her incorruptible musicianship, her authentic and personal approach as well as her artistic integrity, in addition to her uncompromising standards of quality, the new life she has breathed into the viola as an instrument, her dedication to contemporary music and, last but not least, her incredible contribution to education.’

Read: Tabea Zimmermann: how I manage my nerves on stage

Zimmermann will receive the prize at a presentation concert in Munich’s Prince Regent Theatre on 11 May, during which she will perform with Hamburg-based Ensemble Resonanz Lachrymae by Benjamin Britten, who was the first recipient of the prize when it was launched in 1974. The violist will also perform solo works by Kurtàg as well as Berio’s Naturale with percussionist Christoph Sietzen.

Zimmermann began playing the viola at the age of three, and has become over the course of her career one of the instrument’s pioneering advocates. Her artistry has inspired numerous composers to write for viola and has introduced many new works into the standard concert and chamber music repertoire. In April 1994, she gave the world premiere of Ligeti’s Sonata for Solo Viola, written for her. In recent seasons she has premiered works by Kurtàg, Holliger, Rihm, George Lentz and Frank Michael Beyer, to name a few. Her recording of solo works by Reger and Bach with Myrios Classics in 2009 won her an Echo Klassik prize as Instrumentalist of the Year award.

The Ernst von Siemens Music Foundation was founded by Ernst von Siemens, grandson of the industrial entrepreneur Werner von Siemens. A total of 3.6 million euros in prize money and subsidies has been allocated for 2020, the largest share to be distributed to support contemporary music projects in more than twenty countries all over the world. New for 2020, the Foundation has set up an Ensemble Award which will support the development of young ensembles with a total of €150,000.

Tabea Zimmermann will feature on the cover of The Strad May 2020 issue. To subscribe to The Strad, click here.