The US performer, teacher, recording artist and presenter passed away at the age of 74 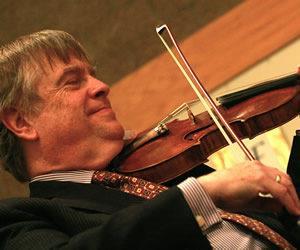 Versatile US violinist James Buswell has died at the age of 74.

Born in  1946 in Fort Wayne, Indiana, Buswell began his violin studies at the age of five, progressing rapidly making his solo debut with the New York Philharmonic Orchestra at the age of seven. He studied with Mary Canberg, Paul Stassevich, and Ivan Galamian at the Juilliard School, as well as studying Renaissance Art at Harvard University.

Buswell had established himself firmly in the musical scene of New York City while still studying, playing at the opening of the Alice Tully Hall with the Chamber Music Society of Lincoln Center, later becoming a regular artist-member. While in his 20s, he began playing the 1720 ‘L’Evèque’ Stradivari violin, the instrument which he played for the rest of his life.

Buswell was an enthusiastic educator, serving on the faculties of the University of Arizona, Indiana University and New England Conservatory of Music throughout his career. Most recently, he joined the faculty of the Steinhardt School at New York University along with his wife, cellist Dr. Carol Ou. They continued teaching and giving masterclasses online during the pandemic.

Buswell was also an extensive recording artist, releasing many albums on the Naxos label. His recording of the Barber Violin Concerto with the Royal Scottish National Orchestra and Marin Alsop was nomiated for a Grammy award. He collaborated with many acclaimed conductors, including Leonard Bernstein, George Szell, Seiji Ozawa, Zubin Mehta, Andre Previn, Pierre Boulez, and Michael Tilson Thomas.

As well as his extensive performing, teaching and recording work, Buswell was also a presenter. In 1990 he appeared in the documentary Stations of Bach, commemorating the 325th anniversary of Bach’s birth.