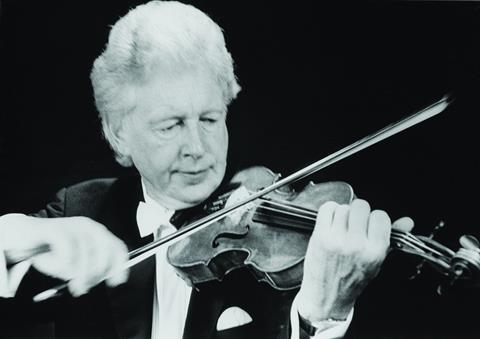 British-Australian violinist Carl Pini has died at the age of 87.

Born in 1934, he was the son of  Anthony Pini, who was principal cellist with five major British orchestras between 1932 to 1976, as well as a cello teacher at both Royal College of Music and Guildhall School of Music and Drama. Carl established himself as a violinist of international reputation, becoming leader of the London String Quartet in 1960. In an interview with the Sydney Morning Herald in 2013, Pini acquired the c.1732-34 ‘Perkin, Burnford’ Bergonzi violin shortly before being offered the job with the London String Quartet, stating, ’I’m sure it was the sound that got me the job as much as anything… either the sound or the fact that it made playing that much easier and gave me confidence.’

Pini embarked on a career leading various ensembles and conducting internationally, moving back and forth between the UK and Australia. In 1968, he moved to Sydney, where he formed the Carl Pini Quartet, recording exclusively for EMI and touring worldwide for Musica Viva. 1975 brought about his new role as concertmaster with the Philharmonia Orchestra, where he led and performed solos with conductors such as Sir Adrian Boult, Riccardo Muti and Zdeněk Mácal. Moving back to Australia in 1983, Pini became the artistic director of the Australian Chamber Orchestra for seven years. Passing the leader baton to Richard Tognetti, Pini departed the ACO to become concertmaster of the Melbourne Symphony Orchestra from 1990 to 1995.

Pini settled in Sydney, where he is survived by his wife Jane Hazelwood, a violist in the Sydney Symphony Orchestra, and his seven children.