The Strad October 2020 issue is out now 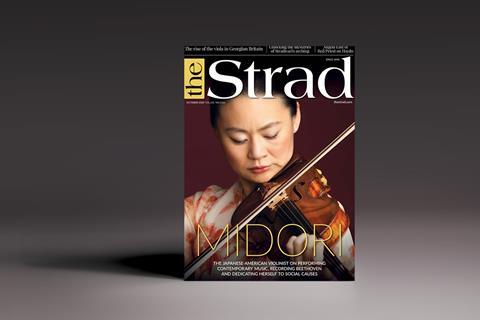 MIDORI: Toby Deller talks to the Japanese–American violinist about her passion for modern works, her teaching methods and undertaking a psychology degree

LUTHERIE AND COVID-19: Violin makers have been hit hard by the 2020 pandemic – nowhere more so than in Italy. Peter Somerford reports on efforts to help the country’s luthiers

SESSION REPORT: US violinist Tessa Lark tells Charlotte Gardner about the recording of her innovative ‘Stradgrass’ album, part of which was put together in her home

THE LATE GEORGIAN VIOLA IN BRITAIN: Kevin MacDonald examines the work of some of 19th-century Britain’s best-known makers, from Benjamin Banks to William Forster and Matthew Hardie

CREMONESE VIOLIN ARCHINGS: Andrew Dipper attempts to solve the mystery of how the old Italian makers worked out their archings, with the aid of evidence from 18th-century manuals

We inspect a violin from 1909 by Erik Lindholm in In Focus; in Trade Secrets Peter Bingen shares his method of ‘organic’ scroll carving; My Space looks behind the scenes in the workshop of Swedish luthier Birger Fredricson; and in Making Matters Ulrike Dederer examines how varnish can affect a violin’s acoustic properties.