The Strad April 2021 issue is out now 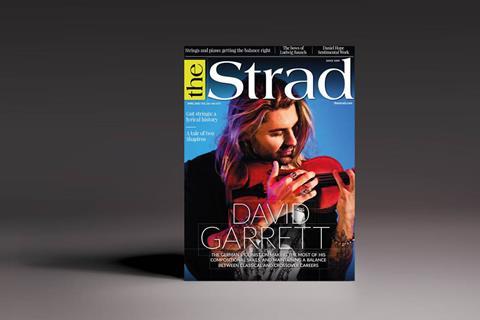 At the age of 40, German–American violinist David Garrett is a bona fide crossover star, in non-Covid times playing regularly to thousands at sold-out arena shows. But, as he tells Charlotte Smith, he has no intention of deserting his classical roots

SONG OF THE GUT STRING MAKERS

In 1877, Markneukirchen in Germany was at the heart of the world’s string making industry. The townsfolk were so proud, they even composed a drinking song all about it. Kai Köpp explains what the lyrics (translated into English for the first time) reveal about this convoluted process

Producing a nuanced, well-balanced and blended combination of piano and strings can be a difficult performance feat to achieve. Pauline Harding talks to chamber musicians, soloists and teachers to discover some of their secrets

Respected during his lifetime, Ludwig Bausch was almost unknown just a few years after his death – and his bows were considered unremarkable junk. Josef P. Gabriel reveals why the maker and his family were almost lost to history, and why his work deserves to be listed among the greats

In the issue’s Masterclass Chiaroscuro Quartet violist Emilie Hörnlund gives us her guide to the first movement of Beethoven’s String Quartet op.59 no.1; in Technique cellist Mats Lidström switches to the right hand for the second part of his guide to warming up; British–Japanese violinst Hideko Udagawa remembers her studies with Nathan Milstein in Life Lessons; plus in Sentimental Work violinist Daniel Hope discusses Schnittke’s First Violin Sonata

We take an In Focus look at a 1729 violin by Pietro Gallinotti head to the Ravensburg workshop of luthier Ernst Fuchs in My Space. In Trade Secrets Andreas Preuss explains how to reinforce a cello bridge while Making Matters asks just how high the saddle of a double bass should be raised.