The Strad November 2020 issue is out now 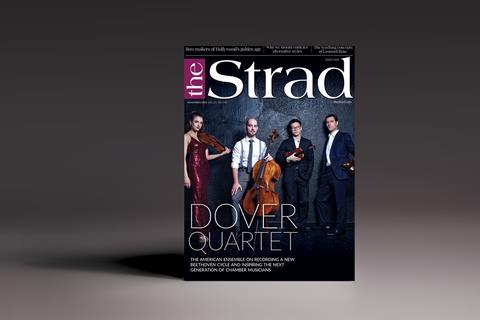 DOVER QUARTET: Charlotte Smith speaks to the American-based foursome about their new Beethoven cycle and residency at the Curtis Institute of Music in Philadelphia

CARLO BISIACH’S US CONNECTION: The Italian maker had an eight-year correspondence with his US representative, Leo D. Larsson. Gennady Filimonov outlines what the letters reveal

LEONARD ROSE: The American cellist was a master of the bow arm, which proved essential for his Juilliard students – some of whom recall their experiences to Oskar Falta

HOLLYWOOD BOW MAKERS: Some of America’s best archetiers gravitated to Los Angeles during cinema’s golden age. Raphael Gold tells their stories and examines some of their bows

We inspect a violin by American luthier Arthur James Maskrey in In Focus; in Trade Secrets Davide Sora shares his method of removing the mould after gluing in the linings; My Space looks behind the scenes in the travelling workshop bus of Damián Stoppani; and in Making Matters David Burgess explains his experiments to alter the downforce on the bridge.