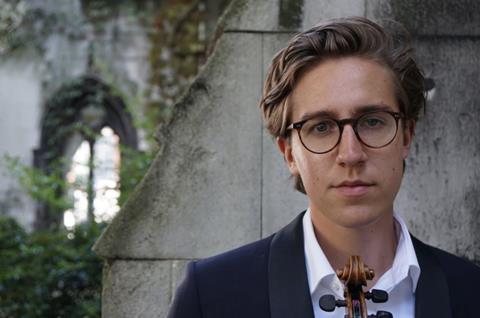 The Hallé has appointed violinist Roberto Ruisi as their first new leader in 25 years, beginning this October.

The British violinist has won a number of prestigious awards including the Royal Over-Seas League String Prize and the Swiss Ambassador’s Award, as well as being a recipient of the Tillett Debut Scheme. As an orchestral musician, Ruisi has appeared as guest concertmaster for L’Orchestre National Bordeaux Aquitaine, the RTÉ Concert Orchestra, Britten Sinfonia and Sinfonia Cymru.

’I remember watching the Hallé rehearse when I was only a teenager, with Sir Mark Elder conducting,’ Ruisi said. ’Their previous leader, Lyn Fletcher, was a mentor of mine and invited me to come and watch. I was utterly blown away. To now be in a position to join this cherished orchestra as its new leader is an honour.’

’Roberto Ruisi is a fabulous young violinist, director and leader who I first saw leading the National Youth Orchestra and has been warmly embraced by our musicians,’ the Hallé’s chief executive David Butcher said. ’We look ahead to many thrilling concerts and projects ahead with Roberto at the helm. We are all looking forward to his debut in Manchester in Ein Heldenleben, with its formidable violin solo.’

Ruisi is a graduate of the Royal College of Music in London where he was a Foundation Scholar and an ABRSM Scholar. He has received tutoring from Maxim Vengerov and The Strad’s September cover star, Pinchas Zukerman.

Ruisi will make his debut as leader of the Hallé at The Bridgewater Hall on Thursday 6 October in a performance conducted by its music director, Sir Mark Elder.