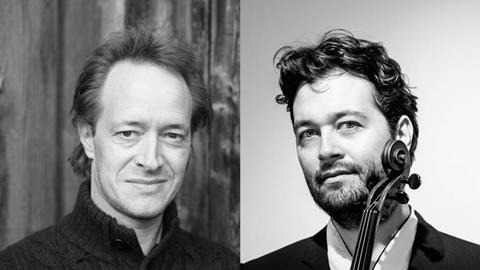 The Royal Academy of Music (RAM) has announced that Anthony Marwood and Lawrence Power have been jointly appointed as the William Lawes Chairs of Chamber Music. Working with the Academy’s chamber groups and ensembles, they will also advise the head of strings, Graham Mitchell, in repertoire choice, future projects and suggesting visiting professors to coach at the Academy.

’Our varied chamber music opportunities play a vital part in Academy life, giving students invaluable experience and access to an exciting range of repertoire,’ said Mitchell. ’Having not one but two chamber music experts in this new role is a real coup, and reflects our commitment to developing further this area of study.’

Junior Academy alumnus Marwood enjoys a wide-ranging international career as soloist, director and chamber musician. He performs as soloist with orchestras including Boston Symphony Orchestra, Gewandhausorchester Leipzig, London Philharmonic Orchestra, National Orchestra of Spain and the Australian Chamber Orchestra, and has been artistic partner of Les Violons du Roy in Quebec and the Norwegian Chamber Orchestra.

Marwood has recorded 50 CDs for the Hyperion label, alongside many recordings for other labels. Leading composers who have written concertos for Anthony include Thomas Adès, Steven Mackey, Sally Beamish and Samuel Carl Adams. For many years he was the violinist of the Florestan Trio.

Power is in demand worldwide as a recitalist, concerto soloist and chamber music partner. Over the past decade, he has become a regular guest performer with many ensembles including the Chicago, Royal Concertgebouw, Bavarian Radio Symphony, Philharmonia and BBC Scottish Symphony orchestras.

A champion of contemporary music, Lawrence has developed a large repertoire of new works. He gave the UK premiere of Olga Neuwirth’s concerto Remnants of Song at the 2012 BBC Proms, and the world premieres of works by Esa-Pekka Salonen, Mark-Anthony Turnage, Julian Anderson, Alexander Goehr, James MacMillan and Huw Watkins. The pandemic saw Power embark on his Lockdown Commissions project, where he performed solo viola works in vacated venues around the UK, as well as heading his new video production company, Âme, with Jessie Rodger.

In addition to the new role at RAM, Power has recently signed to Askonas Holt for management.