The 28-year-old US violinist won the gold medal, a cash prize of $75,000 and future concert and recording engagements 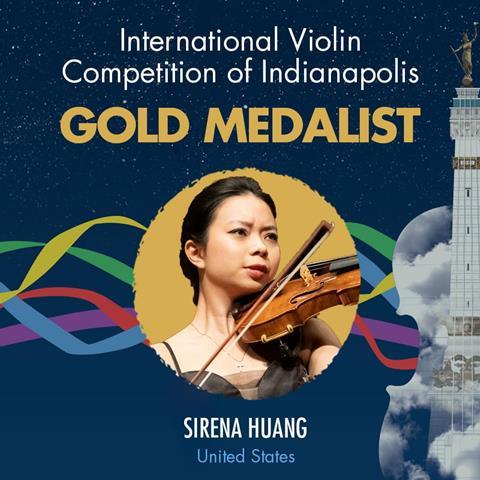 The finals of the 11th Quadrennial International Violin Competition of Indianapolis (IVCI) was held on 24 September 2022. 28-year-old US violinist Sirena Huang was awarded the gold medal first prize, a $75,000 cash prize, a Carnegie Hall recital debut at Stern Auditorium, a recording contract, plus website development and maintenance until the next quadrennial

A graduate of the Juilliard School and Yale University, where she studied with Stephen Clapp, Sylvia Rosenberg, Itzhak Perlman and Hyo Kang, she has performed with ensembles including the New York Philharmonic, the Cleveland Orchestra, and the Shanghai Symphony Orchestra.

The IVCI was founded in 1982 by Thomas J. Beczkiewicz and Joseph Gingold, with Jaime Laredo leading the competition since 1994. One of the competition’s most notable prizes is the loan of the 1683 ’ex-Gingold’ Stradivari violin, which, along with other instruments from the IVCI collection, will be available for the laureates to use until the next competition in 2026.

Read: The Olympics of the Violin: The International Violin Competition of Indianapolis