The concerts, on 4 and10 June, will also be the last in Esa-Pekka Salonen’s tenure as the orchestra’s Principal Conductor & Artistic Advisor 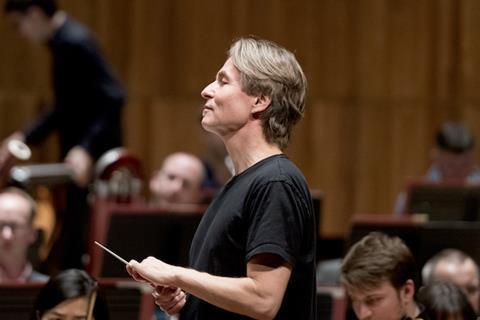 The Philharmonia is to give its first live concerts at London’s Southbank Centre since the UK shutdown in March 2020. The concerts, taking place on 4 and 10 June 2021, will also be the last of Esa-Pekka Salonen’s 13-year tenure as Principal Conductor & Artistic Advisor of the orchestra.

While Salonen has conducted the Orchestra during the pandemic, in livestreamed concerts as well as pre-recorded Sessions released free on YouTube, there has been an unprecedented break of more than 450 days between live concerts in London.

In these live concerts, Salonen will conduct a pair of programmes including the UK premiere of his own orchestral work FOG (a 90th birthday tribute to architect Frank Gehry); and music by Beethoven, Liszt, Stravinsky, SIbelius, and JS Bach. The soloists are pianists Yefim Bronfman and Mitsuko Uchida.

Both orchestra and audience will be socially distanced for the two concerts, and they will be filmed for release online later in June.

Salonen’s creative relationship with the Philharmonia goes back to 1983, when he stepped in at short notice for Michael Tilson Thomas to conduct Mahler’s Third Symphony, at the Southbank Centre. He became Principal Conductor of the Philharmonia in 2008.

Among Salonen’s major projects were travelling location-based audio-visual installations; an app for iPad ; and virtual reality experiences. Digital experiences like these have continued despite the pandemic: immersive online experience Dream was delivered this spring in partnership with a consortium led by the Royal Shakespeare Company.

Commenting on the return of the Philharmonia to live music-making, Alexander Van Ingen, Chief Executive of the Philharmonia Orchestra, said: ‘We are hugely excited to return to our home at the Southbank Centre for these two concerts for a real, live audience. It is bittersweet that after 13 glorious years, Esa-Pekka will be finishing his tenure as Principal Conductor at the end of a Season that wasn’t as we originally planned it. And yet, two wonderful programmes with Yefim Bronfman and Mitsuko Uchida are a superb way of marking the occasion with as many people as are allowed in the Royal Festival Hall, and before Esa-Pekka takes up his new role as the Philharmonia’s Conductor Emeritus.’

Kira Doherty, 2nd Horn and President of the Philharmonia Orchestra, said: ‘Salonen’s years at the helm of the Philharmonia have seen some of the most exceptional music-making of the orchestra’s history. As players, we have been deeply affected by his artistry, leadership and generosity of spirit during his time as principal conductor. It has been a great honour for us all to have shared the stage with such a giant of our time, and we are very much looking forward to continuing our relationship together in the years to come.’

Gillian Moore CBE, Director of Music & Performing Arts, Southbank Centre, said: ‘Esa-Pekka has been a bolt of energy in London’s cultural life. Since his arrival at the Philharmonia, he has inspired a fundamental re-thinking of what an orchestra can be. Looking back, whether it’s his extraordinary 2010 staged performances of Tristan & Isolde with Peter Sellars or bringing audiences into the middle of the orchestra through virtual reality, and so many landmarks since, Esa-Pekka has left an indelible imprint on the Southbank Centre. It’s been a privilege to be able to collaborate with him over the years.’