Violinist Robyn Bollinger will join the orchestra for the start of the 2022-23 season, becoming the youngest female concertmaster in the US 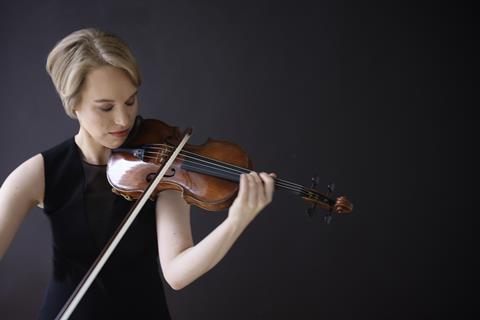 The Detroit Symphony Orchestra (DSO) and its music director Jader Bignamini have announced violinist Robyn Bollinger as their new leader. Following a successful audition in February this year and a two-week trial period, Bollinger will start her role in the autumn season, holding the Katherine Tuck chair.

’Robyn’s great skill and technique were very apparent at her audition,’ said Bignamini. ’I was impressed with her precise intonation, and I remember thinking that we found our DSO sound. Working with Robyn and the DSO musicians in May confirmed that she also is an exceptional leader with the right qualities to be our concertmaster.

’Over those two weeks in Orchestra Hall, she earned our respect, leading with professionalism, seriousness, accuracy, the right amount of flexibility, and a good attitude. Robyn is an excellent musician, and I’m so excited to introduce her and all the DSO’s remarkable new musicians to our audiences this fall.’

In a new intake of musicians, the orchestra additionally welcomed Conrad Cornelison as principal bassoon, Adam Rainey as bass trombone, and Shantanique Moore as flute fellow.

Bollinger has enjoyed a performance career as soloist, chamber musician and leader, making her debut with the Philadelphia Orchestra at the age of twelve. She is a former member of Boston-based, Grammy nominated chamber orchestra A Far Cry. Bollinger has been a frequent guest concertmaster with the Pittsburgh Symphony and has made guest concertmaster appearances with the Indianapolis Symphony and St. Bart’s Music Festival Orchestra.

Bollinger is a returning participant at the Marlboro Music Festival and has appeared at chamber music festivals in the US and worldwide, including Midori’s Music Sharing International Community Engagement Program ’ICEP’ in Japan.

A prizewinner at the 2007 Fischoff National Chamber Music Competition, Bollinger has also received a fellowship from the Lenore Annenberg Arts Fellowship Fund, an Entrepreneurial Musicianship Grant from New England Conservatory and an Early-Career Musician Fellowship from Dumbarton Oaks Museum in Washington, D.C.

Bollinger currently plays on a 1697 G. B. Rogeri violin on generous loan from a private collector and a 2013 Benoit Rolland bow.

Read: How to prepare for an orchestral audition