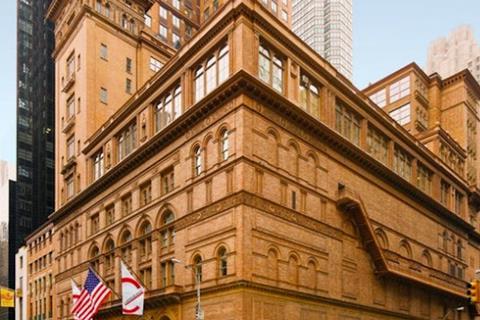 In response to the continuing COVID-19 pandemic, Carnegie Hall, which has been closed since 13 March, has announced that it is to cancel all events in its three performance venues until 7 January 2021.

The Hall’s Opening Night Gala - originally planned for October 7- will be held online.

‘This was a very difficult decision for us to make, however the safety of Carnegie Hall’s artists, audiences, and staff is paramount,’ said Clive Gillinson, Executive and Artistic Director of Carnegie Hall. ‘After consulting with medical professionals and other experts on a continuing basis, we have concluded, in the face of current government restrictions and social distancing protocols, that there is no other option but to extend the Hall’s closure through the end of the calendar year, allowing health conditions to continue to improve. While this has been an enormously challenging time for all of us, we remain focused on preparing for when we will be together again and, in the meanwhile, actively engaging audiences digitally in service of our musical mission.’

Read: Southbank Centre and Wigmore Hall are amongst several venues to close doors

Carnegie Hall intends to expand its digital offerings, with remote concerts from musicians at home, interview and feature series, as well as public access to archived recordings.

Although Carnegie Hall’s performance venues are expected to re-open to the public on 7 January 2021, the Hall’s Resnick Education Wing and offices may open at an earlier date, subject to public health conditions.

Further details on when Carnegie Hall music education and social impact programmes will resume will be shared later this summer. For more information, check carnegiehall.org/events.