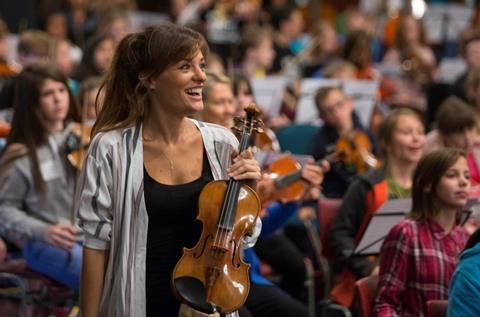 Scottish violinist Nicola Benedetti and her newly-formed Benedetti Foundation Orchestra are to release their debut single, a recording of the Intermezzo from Mascagni’s Cavalleria Rusticana, on 3 January. The recording, made in late November, is released on the Decca Classics label and will be available as a download.

The Orchestra comprises string players from across the spectrum of ages, backgrounds and playing levels - including amateur musicians, music students and professional string teachers. The Benedetti Sessions orchestral workshops will begin this weekend in Glasgow and continue to London (10 – 12 January) and Dundee (6 – 8 March). Further sessions will be held at venues in Northern Ireland, Manchester and Saffron Hall.

In accordance with the Benedetti Foundation’s commitment to enable ‘music making that shows no generational, professional or cultural boundaries’, the violinist worked alongside music charities to ensure children and young people from disadvantaged backgrounds had the opportunity to take part in the workshops. The first three sessions will collectively reach 3,000 young people and 350 teachers, with participants coming from across the UK, from Shetland to the Isle of Wight. In Scotland there are young musicians from 30 of the 32 local authorities with 81 percent state educated in Glasgow and 70 percent state educated in Dundee. Thirty of the thirty-two London boroughs are represented with 64 percent of participants state educated.

Speaking about the recording session, Benedetti commented: ‘It was a beautiful and hugely revelatory experience, bringing together people from literally all walks of music-making life. We are victims of too many categories - young and old, professional and amateur, teachers and performers – but actually, the collective feeling and sound broke all stereotypes and allowed for one of the most positive, relaxing yet engaging musical environments I’ve experienced.’

The violinist is a passionate advocate for music eduacation. She has worked with organisations such as Sistema Scotland and the Nordoff Robbins music therapy charity, and received a CBE (Commander of the Most Excellent Order of the British Empire) for services to music in the 2019 New Year Honours list. She launched the Benedetti Foundation in January 2019 to address equally the needs of players and teachers in the UK. In addition to workshops for players beginner, intermediate and advanced, the Sessions will also include professional development courses for string teachers and primary classroom teachers.