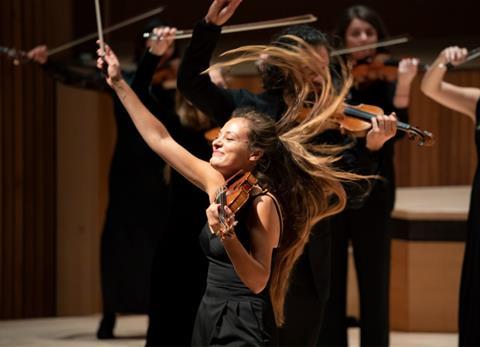 This was the Aurora Orchestra’s first ‘live’ concert for eight months, and I imagine the first for most of the audience too. In that respect the opener by Richard Ayres – No.52 – made a perfect start, not only as a chance to hear in person a commission from last year’s BBC Proms but for its acutely sensitive musical evocation of Beethoven’s hearing loss (as well as Ayres’s). The first movement’s hymn-like string lines are gradually infiltrated by piercing harmonics, but rather than souring beauty with tinnitus the process is more akin to squeezing a drop of dye into water and watching it spread out.

Three years ago Nicola Benedetti played Beethoven’s Concerto on gut strings with the Orchestra of the Age of Enlightenment, and she brought a period sensibility to this account, with patchy success. Her sound struggled to project into the Festival Hall, and many smaller notes were lost under the fingers: I found myself longing for a sustained legato phrase once in a while.

Benedetti’s own cadenza took its cue from the timpani dialogue devised by the composer to accompany his piano adaptation of the concerto. Bringing the Aurora’s winds to the front of the stage for the Largo encouraged them to play down as well as heighten their communion with the soloist. Ornamental flourishes and dynamic refinements lent excitable impetus to the finale, but it made a meagre compensation for a steady inner rhythm, and Benedetti was quite drowned out by the final tutti. After concert halls have lain dark for so long, perhaps a degree of tuning up and in is to be expected for both listeners and musicians.