Total prize pool worth $300,000 includes a two-year paid residency for the winning quartet and cash award 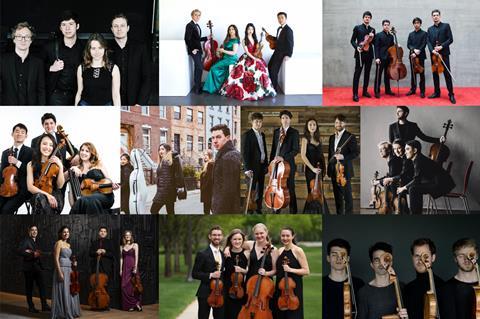 The triennial Banff International String Quartet Competition has named the ten string quartets shortlisted to take part in its 2019 live rounds. The ensembles will compete in five rounds from 26 August to 1 September 4 at the Banff Centre in Alberta, Canada.

First prize, worth over $150,000, includes a cash award of $25,000 in addition to a three-year artistic and career development programme and a two-year paid residency at the Meadows School of the Arts in Dallas, Texas.

The ten quartets are:

‘My fellow jurors and I worked hard to produce a list of which we are proud, but those who did not make the list deserve to be complimented for their fine playing and obvious hard work,’ said Costanza.

‘This younger generation of quartets is raising the bar and assuring a bright future for chamber music – I’m excitedly encouraged and optimistic that great music will not only survive but will thrive through their continued devotion to all things musical!’

The live competition will be judged by:

‘The Banff International String Quartet Competition is like the Olympics of chamber music, we can hardly wait to welcome these wonderful artists to Banff.’