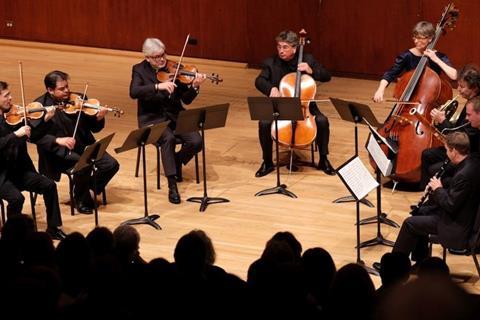 The Academy of St Martin in the Fields has announced that it will be presenting re:connect – an eight-concert series with live socially distanced audiences - at its namesake church, St. Martin-in-the-Fields, this autumn.

The concerts will take place at 5pm and 7:30pm on two Saturdays per month with guest artists including baritone Roderick Williams, soprano Carolyn Sampson and composer-conductor-pianist Ryan Wigglesworth performing a wide range of repertoire.

The series begins on 12 September with a programme entitled Requiem For Our Time, honouring those who have suffered and lost their lives to COVID-19. It is also given in memory of Martin Loveday, a former cellist with the Academy who died from Coronavirus in April 2020. The programme comprises Pärt’s Cantus in Memoriam Benjamin Britten, followed by Williams and Sampson performing Fauré’s (arr. Rutter) Requiem with St Martin’s Voices, conducted by Andrew Earis.

Each concert is named after a theme from the experience of the pandemic including Regeneration, Isolation & Friendship, Mourning & Hope and Awakening.

Overcoming Distance on 26 September includes music by Bach and Mozart as well as Messiaen’s Abîme des Oiseaux, James MacMillan’s Interlude from ‘Since it was the day of Preparation’ and Copland’s Quiet City.

In Connection, on 21 November, the Academy performs Eleanor Alberga’s Nightscape, conducted by the composer, alongside Mozart’s Serenade No. 10 ‘Gran Partita’. The final concert, on Friday 18 December, will be a festive celebration.

Read: Academy of St Martin in the Fields to broadcast monthly archive concerts for free

Each performance will be filmed and the streams will go live on the following Thursday at 7.30pm on a pay-to-view basis – they will be available online for 30 days. The full line up of soloists and repertoire will be announced in due course.

The Academy of St Martin in the Fields and St. Martin-in-the-Fields church are closely following government guidance and each concert will adhere accordingly to the latest advice.

Andrew Earis, Director of Music at St. Martin-in-the-Fields says: ‘It is wonderful to be able to begin welcoming live audiences back to St. Martin-in-the-Fields as we embark on our new vision for music at the church. I’m so pleased that our friends at the Academy will play such a large role in our Autumn season. After many long months of silence, we’ve all felt the hole of not having live music making in our lives and now it is time to enjoy it once again.’