Korean cellist Gaeun Kim wins $13,000 and a host of future performance opportunities in the US 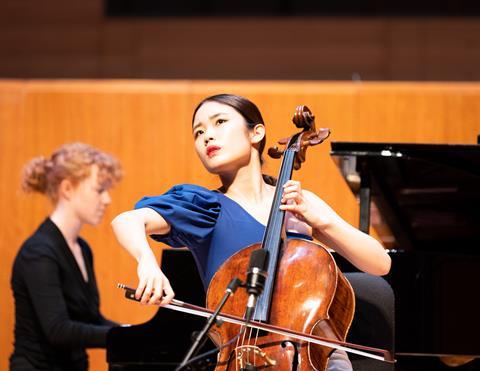 The semifinal and final rounds of the Irving M. Klein were hosted by the California Music Center (CMC) in San Francisco on the 4 and 5 June, following which cellist Gaeun Kim was named winner of the competition’s 37th edition. Kim won $13,000, as well as performance contracts with the Peninsula and Santa Cruz Symphonies, Gualala Arts Chamber Music Series and Music in the Vineyards. Kim also won the Pablo Casals Prize for the best interpretation of Bach.

Kim is a student of Richard Aaron at the Juilliard School. Recently she was one of six winners of the ‘Classe d’Excellence de Violoncelle’, led by cellist Gautier Capucon with whom she also studies, and served as the Louis Vuitton Foundation Artist until 2021.

Second prize of $6,300 was awarded to 22-year-old violinist Jaewon Wee. The prize also includes performance contracts with the San Jose Chamber Orchestra, among others. She was also awarded also won the Weiss prize for Best Performance of the Commissioned Work.

Third Prize was awarded to 18-year-old violinist Andromeda Kepecs, who received $2,500. She attended the Menlo School and studies with David Chernyavsky. She will enter Columbia University to study with Li Lin in the Columbia-Juilliard Program.