A number of familiar competition circuit names make it through to Hannover based event’s next phase, and chance of €50,000 first prize 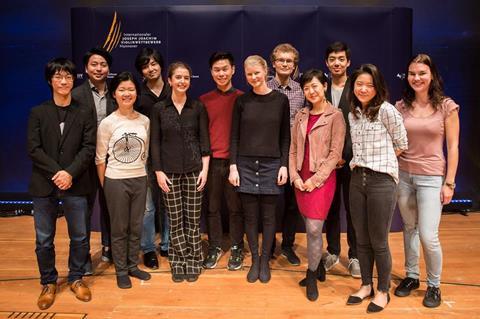 The Joseph Joachim International Violin Competition Hannover, which began on 13 October with 32 participants, has announced the 12 who are moving forward to the semi-final stage.

The semi-final round begins today at 7.30pm central European time, running until Sunday 21 October. Each violinist will perform a programme of just over an hour, including the commissioned piece, Hauch by German based British composer Rebecca Saunders.

The finalists will proceed to a chamber music round, where they will lead a string quintet, and a concerto performance with the NDR Radiophilharmonie conducted by Andrew Manze. There will also be a Prize Winners’ Gala Concert on Saturday 27 October.

The triennial event in offers a €50,000 top prize plus Naxos album release, the loan of a G.B. Guadagnini violin and performance invitations. Previous winners include Frank Huang, Nemanja Radulovic and Antje Weithaas.

There is a live stream of all the rounds available to view here.