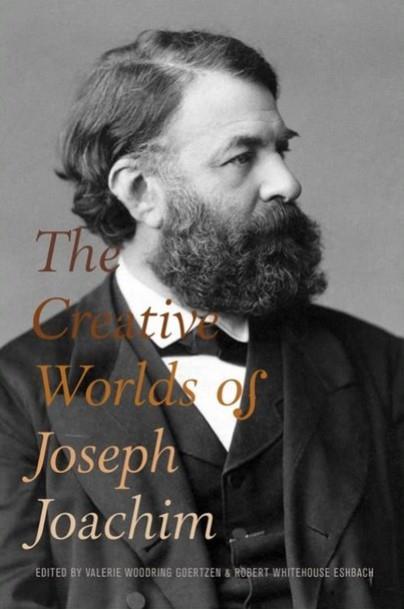 The Creative Worlds of Joseph Joachim

The Creative Worlds of Joseph Joachim

This compilation of essays forms the published record of an international conference held at Boston’s Goethe Institute in 2016. Editors Valerie Woodring Goertzen and Robert Whitehouse Eshbach bring order to conference paper chaos by organising their book into three sections.

Following Eshbach’s introductory essay, in which he reviews the available literature about Joachim, the first two parts of the volume embrace some less usual aspects of the virtuoso violinist’s life and creativity. Part One (‘Identity’) comprises three informative studies exploring aspects of Joachim’s youth: the profound influence of Mendelssohn in his formative years (R. Larry Todd); his Jewish ancestry and associated anxieties, and his early assimilation into Christian society (Styra Avins); and his Hungarian background and empathy with Hungarian, and specifically Romani, music as well as violinists such as Ferenc Bunkó and Gyula Benczy (Mineo Ota).

‘Joachim as Performer’ is the theme of the second part, which includes essays on his performances in Britain, both generally, courtesy of recently available personal papers of his family (Ian Maxwell), and more specifically at London’s Saturday Concerts (Michael Musgrave) and Monday Popular Concerts (Therese Ellsworth), concentrating on issues of repertoire and critical reception. Of particular interest to readers of The Strad will be Ruprecht Kamlah’s investigation into the provenance and subsequent ownership of some of the violins associated with Joachim, and Sanna Pederson’s survey of Joachim’s foremost pupils and their subsequent careers in the profession. Joachim’s predilection for string quartet performance is Robert Riggs’s topic for examination, focusing on the significance of the Berlin Joachim Quartet and its varied membership, and Karen Leistra-Jones considers Joachim’s powerful spiritual connections to Beethoven and the reception of his performances as examples of Kunstreligion or sites ‘of re-enchantment’. Finally, Beatrix Borchard compares the impact of Joachim’s programming on performance history with that of his contralto wife Amalie and William P. Horne examines the influence of Joachim’s and Brahms’s performing experiences on the Trio section of the third movement of Brahms’s Piano Quartet op.26, making interesting connections with Beethoven’s Violin Sonata op.30 no.2 and Schumann’s String Quartet op.41 no.3.

Part Three is dedicated to Joachim’s compositions. Following her monograph on Joachim’s music (2018, reviewed in The Strad, April 2019), Katharina Uhde re-examines how some of his ‘audience pleasers’ as a youthful performer, notably pieces by violinist–composers such as Bériot, Ernst and David not only impacted on his own fantasies and other early compositions (1841–53) but also contributed to his eventual rejection of pronounced virtuosity in both his programming and compositional approach.

Vasiliki Papadopoulou then offers a greatly enhanced understanding of the genesis of Joachim’s Violin Concerto no.1 in G minor and its substantial revisions and Valerie Woodring Goertzen analyses the Overture to Henry IV op.7 as an extended single-movement symphonic drama making skilful use of thematic transformation within a sonata-related design. Joachim’s religious identity and Jewish ancestry are revisited in Marie Sumner Lott’s survey of the Hebräische Melodien op.9, along with the contemporary vogue of Romantic medievalism and anti-Judaism. Robert Riggs’s second contribution uses Tovey’s analytical essay on the ‘Hungarian’ Violin Concerto op.11 as a starting point for deeper discussion of the work’s structure, violin writing, historical significance and the style hongrois. Riggs disagrees with Tovey on various issues and makes a case for the work’s relationship to piano concertos by Beethoven (no.3) and Brahms (no.1).

Incorporating an extensive bibliography and index, 27 illustrations, 18 tables and 40 music examples, this compilation comes with all the requisite scholarly trimmings. It will doubtless interest a wide and diverse readership and fill several voids in published information about this renowned German violinist, composer and pedagogue, his wide circle of musicians and the musical aesthetics, culture and styles of their time.