James Ehnes, Charles Beare and three Strads at the Sheldonian

Ariane Todes reports from a fascinating evening for violin lovers 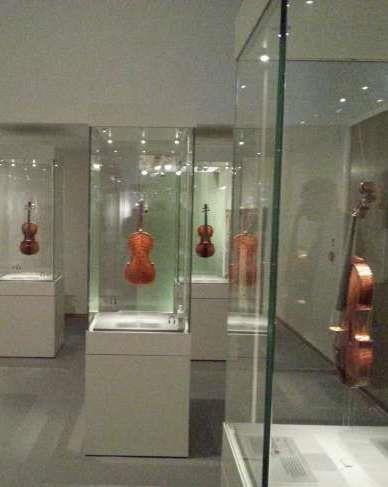 Who, in an ideal world, would be allowed to play the Stradivaris? I’ve often pondered this, usually while listening to an average-sounding performer whose main marketing point is their Strad. Should it be the most famous players? The highest-earning? The wealthiest or the best fundraisers? The youngest or the oldest? Those with the most talent or with the most consistent track record? Those with the best reviews or the biggest fan clubs?

As I sat in the Oxford’s Sheldonian Theatre on Friday night with a host of violin aficionados, listening to James Ehnes playing three Stradivaris as part of the events marking the Ashmolean’s exhibition devoted to the maker, I had no doubt: Ehnes deserves to play any Strad he wants, anywhere in any world.

Actually, he currently plays the 1715 ‘Marsick’ Strad, and as he explained in the opening conversation with Curtis Price and the violin experts’ expert Charles Beare, he’s certainly had opportunities to play other ones: tonight, alongside the ‘Marsick’ he was playing his 92nd and 93rd Strads – the early, 1666 ‘Serdet’ and the 1711 ‘Parke’.

In the opening discussion, Ehnes offered his thoughts on the different violins: ‘The instruments each have a unique identity, but they all have a family identity. There’s a certain similarity in terms of tonal ambitions. Stradivari had an idea of what sound should be that is consistent throughout his output. The 1666 is the earliest I’ve played so I wasn’t sure what to expect. It’s a hybrid – it has the warmth and roundness of Amati, but the focus and sizzle that’s typical of Stradivari. I’ve admired the 1711 before in pictures. It’s not played regularly so I could tell as I was warming up to it that it was warming up to playing again. It’s fascinating to feel that release of sound.’ He also described his own ‘Marsick’: ‘Some people think that instruments take on the character of the player. I think an instrument gets used to responding to a certain type of stimulus. Things work well because I do them all the time.’

Charles Beare offered his perspective: ‘We think the “Serdet† is the earliest Stradivari with an original label, on which he’d printed that he was the pupil of Amati, although that is contentious. He was almost certainly trained as a wood carver – he was 22 when it was made. After that he was always experimenting. His aim was to make better and better instruments, so his approximately 600 violins, 10 violas and 50 cellos are made in a sequence of ambition. He cracked the whole thing wide open from 1700, when you can see the instruments changing year on year. By 1711 he was into his best period, and 1715–1721 is referred to as the highpoint.’

By way of direct comparison, Ehnes played the opening of the Elgar Violin Concerto on each instrument. This seemed a perfect choice for demonstrating the different areas of the fiddle one at a time in detail – such tests often feature excerpts that whizz all over the place but don’t really give the player or listener a chance to focus on each sound. It was a fascinating juxtaposition, anyway, and while there were differences – was the ‘Parke’ fuller than the ‘Serdet’, did the ‘Marsick’ have the most open sound? – these weren’t as great as one might have expected. I found it difficult to articulate large differences, but it was interesting to note that Ehnes found different things in each, and further, to my ears this seemed to affect his interpretation of the music, whether more intimate (‘Serdet’) or passionate (‘Parke’) or colourful (‘Marsick’).

You could see Ehnes listening to the instruments, working in a feedback loop between what he was hearing, what he wanted to hear and what he needed to do to find it, trying anything to respond to the sound, whether by subtle differences in angles, speeds or pressures of the left or right hands. This is exactly why he deserves to play a Strad – he is constantly looking for the complete range of possibilities and has the wherewithal to find them and use them in the service of the music.

When asked what happens when an instrument isn’t played, Beare answered, ‘When a great violinist picks up a violin that’s been in the back for fifty years, it takes one or two hours to get it going and then it gets better and better.’ He told the story of Pinchas Zukerman trying a Guarneri that hadn’t been played for a while, saying, ‘Give me two minutes!’ Beare added, ‘He got there in twenty.’

Ehnes debunked some of the myths about the differences between Guarneris and Strads: ‘They respond in different ways that are difficult to describe because they are so sensory. A Guarneri “del Gesù† requires a denser, more compact bow stroke. But there are Strads that are like Guarneris and Guarneris that are like Strads. There are commonly held misconceptions that Guarneris are louder and that Strads have a nicer sound, but this isn’t necessarily the case. Guarneris in a certain sense create their own acoustic. You can play one in a carpeted cubicle and it still sounds majestic. A Strad takes on the acoustic in which it is being played, but in a special acoustic, you can do things you can’t do on any other violin.’

Beare added: ‘Although the makers lived a stone’s throw apart, Stradivari died in 1737 aged 93, Guarneri “del Gesù† in 1744 at the age of 46, so he had a shorter career. I always felt that when Guarneri came of age, he thought Strad had gone as far as he could go in a certain direction, so there is a certain Brescianism in Guarneri's work. Some players have a different feeling when playing these instruments. There’s a darkness; they could go as far as they like but the sound still comes out. With Strads they have to draw the sound. Most players choose one or the other. The personal preference depends on their style.’

Ehnes then focused in on each instrument, choosing the ‘Serdet’ to play the Preludio from Bach’s Partita no.3. He explained why: ‘I’m fascinated by the idea that the violin had been around fifty years by the time the partita was written, so it’s not unlikely that Bach would have heard it on a violin like this.’ He moved on to the ‘Parke’ to play Prokofiev’s Solo Sonata, the complex voicings of the music carefully drawn with different colours. And lastly, he stunned with Paganini’s Caprice no.24, understandably coming home to the ‘Marsick’ for the feat. A piece that is usually treated as a hammy virtuoso barnstormer was intimate and subtle, a voyage of discovery making use of every sound quality of a considerable artillery, all with a technical security that you’d only expect from a well-edited recording. My only complaint was that we didn’t get the repeats to hear everything twice. This was partially made up for by a ravishing encore of the Largo from Bach’s Third Sonata on the 1711, Ehnes explaining: ‘I don’t know when I’ll get to do this again so this one’s just for me.’

Ehnes playing Bach on one of the best Strads in the world is a tough act to follow, but in the second half violinist Adrian Chandler and La Serenissima did well with repertoire by three composers whose output spanned Stradivari’s life – Navara, Valentini and Vivaldi, in chronological order. Apart from being a fascinating survey of the development of string writing, it was a valuable insight into the sorts of requests Stradivari might have been given as he developed his models. Group harmonies and timbres become more sophisticated, first-violin parts more exposed, higher and faster, with plenty more string-crossings.

Before the concert I had the chance to visit the Stradivari exhibition at the Ashmolean, which opened on Thursday: 21 of the best Strads, selected by Beare as being most representative and in the best state of preservation. I hadn’t left myself enough time, but fortunately violin expert Philip Kass was there to highlight