String trio repertoire from Haydn to the present day

To accompany The Strad’s October 2017 issue cover feature on the Trio Zimmermann, Geraint Lewis looks at the available repertoire for this Cinderella of string genres 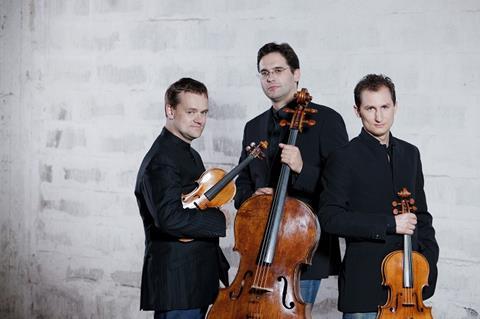 The following is an extract from a longer article in The Strad’s October 2017 issue – to read the full article, download the issue on desktop computer or via the The Strad App, or buy the print edition

The one unquestioned masterpiece for string trio was entered into the composers’ logbook on 27 September 1788: Mozart’s 45-minute, six-movement Divertimento in E flat major K563 for violin, viola and cello. But, as is so often the case, most post-Classical musical roads lead back to Mozart’s great friend and mentor, Haydn. Considered the ‘father’ of the string quartet, Haydn was the first composer of genius to have grasped the emerging ‘sonata form’ in its various embryonic guises in the mid-1750s – symphony, quartet, concerto, keyboard sonata and keyboard-based trio – and then shaped it to his own expressive ends, thus changing the course of musical history. Perhaps less well known, however, is that he also ‘created’ the modern string trio as we know it – even if only just.

In 1765 Haydn started to compile his invaluable Entwurf-Katalog – the first reliable guide to the authenticity of his earliest works at a time when pirated editions and blatant forgeries were beginning to flood the market. Within this catalogue we find listings for 21 string trios, of which 18 have miraculously survived – 17 of them scored, conventionally enough, for two violins and cello. The Trio no.8 in B flat major, however, is the first of its kind to call specifically for violin, viola and cello, and can therefore claim to have started a new ball rolling. Precise pre-1765 dating is impossible, but the musical language would suggest a point, for most of the trios, just before the emergence of Haydn’s first string quartets (opp.1 and 2) around 1755 to 1757. Like all the other trios, no.8 has three shortish movements – as opposed to the five common to all ten early string quartets – opening with an adagio and six sinewy variations, followed by an elegant minuet and boisterous ‘hunting’ finale. Performances and recordings are scarce but all are published in an impeccably scholarly edition by Henle.

To read the full article, which continues via Beethoven to Webern, Schoenberg and beyond, download The Strad’s October 2017 issue on desktop computer or via the The Strad App, or buy the print edition