8
From the Archive: a violin by Michael Angelo Bergonzi, Cremona, 1757

From the Archive: a violin by Michael Angelo Bergonzi, Cremona, 1757 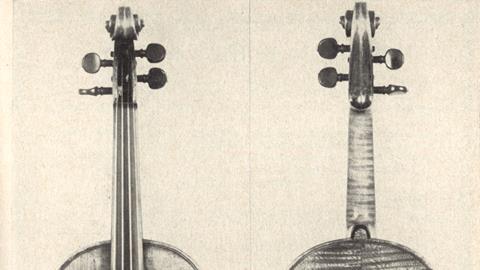 This illustration of a violin by Michael Angelo Bergonzi was published in The Strad, January 1970. The following text is extracted from the article accompanying the photographs:

Five Bergonzis are known to have worked as violin makers in Cremona. Carlo, the founder of the family was active from the closing years of the 17th century until his death in 1747.

Carlo's son, Michael Angelo, (1722-c.1765) ranks next in importance in this family of makers. It is only in the last 50 years or so that he has received the recognition that is his due. Although, admittedly, not as fine a craftsman as his father, nevertheless his standard of workmanship is far higher than he is usually credited with.

The violin by Michael Angelo illustrated here is a bold and well preserved example which according to its label was made at Cremona in 1757. The back is cut on the quarter from two pieces of maple with regular medium to medium narrow flames slightly ascending from right to left. The table is of two pieces of pine with narrow grain at the centre and treble side, and somewhat broader on the bass side. The ribs are of maple similar to that of the back, the scroll is of less prominently flamed maple. The varnish is orange-brown in colour. The principal measurements are: Length of Body, 14 inches; Upper Bouts, 4 3/8 inches; Lower Bouts, 8 1/8 inches bare.

This handsome Bergonzi has been certified authentic by Rembert Wurlitzer, Inc., of New York. It is now in the possession of the well-known American connoisseur, Ted Marchetti of 4175, Nottinghill Gate Road, Columbus, Ohio, U.S.A. who is offering it for sale.