From the Archive: a cello by Pressenda, Turin, 1828 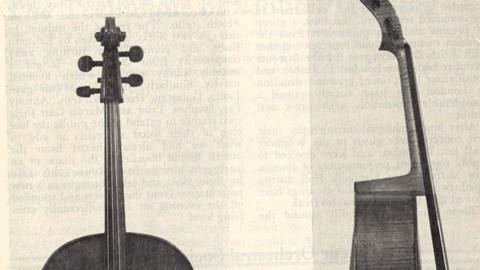 This illustration of a cello by Pressenda was published in The Strad, June 1970. The following text is extracted from the article accompanying the photographs:

Although a number of fine violins by Pressenda have been illustrated in this journal, the splendid violincello featured this month is the first by this maker to appear in these pages. It was made when the maker was at the peak of his powers.

The instrument is in an excellent state of preservation, indeed it is in almost mint condition. The proportions are good and it measures 29 ¼ inches in length of body. The added flanks to the lower bouts of the table are original. The varnish is a golden-brown colour.

Joannes Franciscus Pressenda was born in 1777 at Lequio Berria in Piedmont and studied for a time with Lorenzo Storioni in Cremona. In 1814, he was working in Alba combining violin and cabinet making with the craft of jeweller. Two years later he moved to Carmagnola where he stayed until 1820 when he settled in Turin and remained there until his death in 1854.