Finding the perfect cello endpin †• and how to stop it slipping

Most cellists can tell an embarrassing tale about a spike calamity, says Alice McVeigh 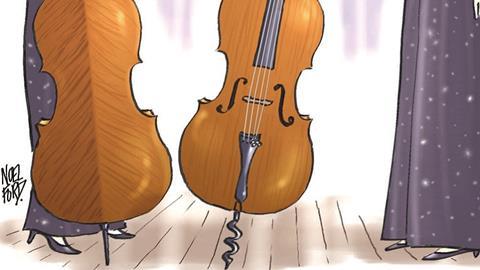 The cello spike (or endpin) has had a short and chequered history. Short because, as everyone reading this will know, the cellists of the Baroque and Classical periods had very well-toned legs, having been obliged to balance the cello on their calves. Wimpier players occasionally employed a neck strap, or even a stool, but few reputable professionals would have dared.

Naturally, those of us who became converted to the Baroque cello as grown-up professional cellists will hugely sympathise. There can be few of us who haven’t, after a course of Baroque practice, stood up without realising the strain we’d been submitting our legs to, and staggered suddenly.

It was an anonymous bright spark in the late 19th century who first thought of putting a wooden stick on the end of his cello. Had he been a really bright spark, of course, he would have first rushed to his nearest patent office, but, as it is, his anonymity remains intact. The idea spread like wildfire, and before long every cellist was sporting a spike on the end of the instrument. This allowed them to enjoy improved sound – warm calves would have had a dulling effect on their cello projection – and increased freedom to sway around artistically. The effect of having an endpin is also supposed to have improved the chances of ladies choosing to play the cello, as it made sitting side-saddle – at that point considered the only truly ladylike pose – a realistic if still uncomfortable option.

These days, of course, endpins come in an astonishing array of materials and design. Spikes can be composed of rosewood, boxwood and ebony as well as carbon fibre and hollowed steel. Their fittings can be fashioned of nickel, silver and even gold; and they can be finished off with carbon rod or tungsten tips. Endpin lengths usually vary from 18 to 20 inches, with 5„16th of an inch being the standard diameter. Carbon fibre is, these days, considered the best material, especially as it has only one-third the weight of steel: let’s face it, when it comes to hoicking cellos around, every 100th of a pound counts.

No acoustical test I have personally been able to access has actually proven that any of these substantially improve the sound of the cello in any serious way, unlike, say, a different string, a lighter tailpiece, or a really well-crafted new bridge or soundpost. However, that doesn’t mean that there’s no difference between them – especially as, since the days of being termed ‘knee fiddlers’, cellists have been in search of the perfect spike: one that is feather-light yet snug and strongly fitting, and that, above all, is never in need of sharpening.

Many cellists including Raphael Wallfisch and Peter Dixon, principal cellist with the BBC Philharmonic, swear by the Manson spike, yet hand-carved wooden spikes have even been adopted by some Classical-cello players. The company Bois d’Harmonie makes perfectly elegant hand-carved wooden Classical spikes, complete with ornate curlicues, so you don’t have to do your back in when you play Baroque anymore. However, these spikes come fully equipped with carbon-fibre adjustable rods at their ends, which for me rather wrecks the historical image.

No cellist is without some tragic tale of when his or her spike-holder proved an embarrassment, though many fell strangely quiet when I asked them for names, dates and serial numbers. However, a cellist friend of mine, Stephen Buck, still recalls the day his pint-sized spike-cover saved his life, shortly after the thrilling moment when he’d just received his first half-size cello. Aged only seven, and understandably overexcited, he swung his new prized possession down the school corridor in ever-increasing circles. Unluckily he literally ran into his then-headmaster, whom he stabbed in the lower plexus with the (covered!) point of his cello spike. The headmaster’s comments remain unrecorded.

Still more embarrassingly, presumably while making some artistic communication, one Japanese double bass player managed to entrap his pin-sharp spike accidentally in the conductor’s podium. Annoyed, he pulled on the neck of his bass – unfortunately so powerfully that he was left holding its neck, leaving the rest of the bass (with its triumphant spike) still implacably embedded in the conductor’s podium.

The spike has even been used, bizarrely enough, for musical purposes. The cellist Jean-Paul Dessy has written a solo cello piece that begins, in his words, with ‘the left-hand fingernails begging for a bow’, and finishes with the player bowing on the spike. He performed the work at the 25th Gulbenkian Encounters of Contemporary Music in 2001.

And then there are the ‘Incredibly Shrinking Spike’ stories and the ‘I Didn’t Really Miss That Shift, Instead My Spike Slipped’ stories – some, especially those behind voluminous evening gowns, supposedly true. Allianz Musical Insurance has admitted an occasion when an unnamed claimant caught his cello spike in his trousers and tripped on top of his cello, crushing it beneath his weight. The value of the cello is also shrouded in discretion. The cellist’s and the double bassist’s desperate desire to prevent endpin slippage has to be one of the saddest sagas of human history. A host of devices has been designed to minimise slippage, including the ‘black hole’, which can still slip on marble or similar surfaces, and the ‘T-bar’, which frankly feels funny.

As well as slippage, double bass players also complain about ‘bouncing spikes’. Despite this, generally speaking, double bassists seem notably less hung up on spikes than cellists, owing no doubt to the more inherently vertical nature of their instrument, as well – perhaps – as to the fact that they’re less hung up generally than we cellists. I suspect that just moving the double bass around imbues one with a less stressed, more philosophical mentality.

Personally, I’m still – when necessary – loyal to Xeros cello endpin anchors, though I’ve never forgotten the dubious look mine got from an inquisitive English Heritage representative as I shoved it atop the probably irreplaceable mahogany flooring. ‘But what does it do?’ she wanted to know, in cut-glass accents.

Ardent research has also uncovered Earthstar endpin supports in tasteful black walnut or Honduras mahogany, designed to complement the shade of your cello varnish, as well as the Super Sensitive ‘Stoppin’, which looks like a square-edged waffle in rather overpowering colours.

And yet the spike itself has done the musical world so singal a service that only Spohr’s claimed invention of the chin rest can begin to compare to it. For a start, the resonance of the cello is both released and clarified, as the cello can be only lightly held. Secondly, the varnished sides of literally thousands of marvellous old cellos are freed from discoloration by human sweat. Thirdly, the cellist’s back is not hunched, allowing the shoulders to operate with complete freedom. Fourthly, yet still more crucially, the cellist does not end up walking bowlegged after putting down their cello in order to grab a coffee.

More latterly, the spike itself, some would argue, has been freed by Paul Tortelier’s famously bent endpin. The fact that such a horizontal fingerboard makes me personally feel (a) as if the cello is bobbing around under my nostrils instead of solidly and comfortingly up against me; (b) as if both my arms have to crook their wings like those of a bird of prey in order to extract the sound; and (c) vaguely seasick, is neither here nor there. It certainly works for a lot of cellists. In fact, whereas soloists such as Pablo Casals, Emanuel Feuermann and Gregor Piatigorsky all used a shorter, straighter endpin; these days even cellists lacking Tortelier’s lanky frame or Rostropovich’s endless arms seem to want the cello not only higher but also closer. This may be the great debate of our age: straight spike or bent spike? And how long, exactly?

Personally, I feel that, as long as you’re not gripping with your knees, which would dampen the tone of any class of instrument, a straight endpin or a bent one is down to personal preference. And surely the final decision is different for cellis