7 tips from the class of Jascha Heifetz

Sherry Kloss was Heifetz’s student and later teaching assistant – he even left her a Tononi violin and a Tourte bow in his will. Here she recalls some of the master’s methods 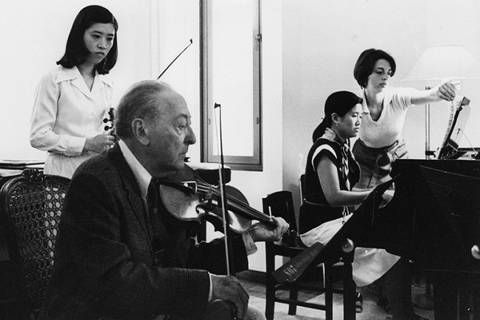 Who can deny the powerful impact of the student–teacher relationship? It takes just one special individual to affect a student. The recipient of these interactions receives a personal legacy of learning that can enrich an entire lifetime.

I was the subject of Jascha Heifetz’s teaching as a member of his class during his last years of masterclasses at the University of Southern California. He taught us his own personal beliefs and methods, including a regular regime of warm-ups, scales, etudes and vibrato exercises; the resolution of technical passagework; the discovery of colours; sight-reading (especially the Martinů Etudes rhythmiques); chamber music (including duos, quartets, quintets, piano trios and quartets); viola and piano skills.

Most of all, Heifetz inspired us continually to seek excellence. 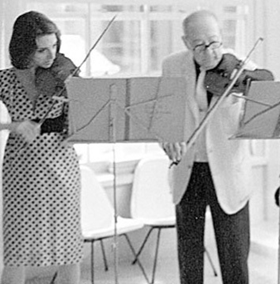 The warm-up Perhaps the most important of these was the warm-up, which consisted of drawing long, slow bows beginning on the open G string and continuing a scale up two octaves to the E string, with no vibrato. The next step was to play a steady crescendo on the down bow to the tip followed by a slow, steady diminuendo back to the frog.

Scales More complicated scales came next. He began with double-stops, although we were expected to master scales on single notes, in 3rds, 6ths, octaves and 10ths in all keys and combinations. He might ask to hear G double flat harmonic minor in 6ths – beginning on the fourth degree of the scale!

Etudes Kreutzer, Rode, Dont, Gaviniés, Hindemith, Paganini – as well as the Bach unaccompanied sonatas and partitas, and difficult, ‘unplayable’ passagework including staccato bowing (in Wieniawski) and spiccato bowing (in Paganini, from memory).

Staccato was to be executed with a stiff arm and elbow. ‘Raise the upper arm and don’t unlock the elbow,’ Heifetz would say. ‘It should sound scratchy under the ear. This is the sound which carries in a hall.’

Vibrato, tone & intonation He told us that there are five different kinds of vibrato. We were expected to create at least three of them, and he taught us to work on the same passage using different areas of the fingertip to discover and develop the best places to create different types of sound – brilliant, sensuous or sweet, for example. Heifetz advised us ‘not to copy anyone’, and we spent much time on the discovery of tone production. Intonation was not addressed in itself; our teacher believed that, ‘If they don’t hear themselves, it doesn’t do much good for me to tell them.’

Competitions Occasionally there were in-class competitions for the best scales, best 10ths and the best staccato. The students voted for each other, and at the end Heifetz added his own appraisal. He forbade his students from entering other competitions, however. If he discovered that someone had disobeyed this rule, they were thrown out of the class. ‘Who is judging you? What are their credentials?’ he would ask.

Violinist Sherry Kloss was a pupil of Jascha Heifetz from 1974 to 1979, and his teaching assistant from 1980 to 1986. She has held violin professorships in South Australia, California and Indiana, and is the author of Jascha Heifetz Through My Eyes.