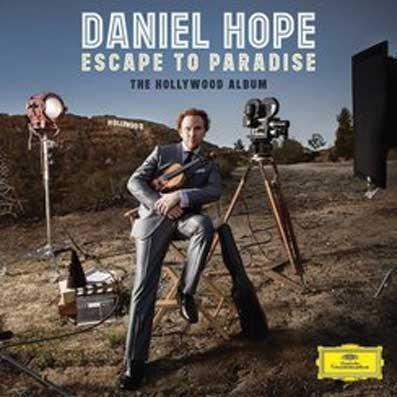 The centrepiece of Daniel Hope’s latest album is a commanding performance of the Korngold Concerto that exchanges the swashbuckling, rapier-precision authenticity of Heifetz’s premiere recording for a more heart-on-sleeve, portamento-inflected espressivo that makes it sound more than ever like the concerto Richard Strauss might have composed during his tone-poem heyday. Some may feel that for music already so saturated with bravado machismo and cantabile intensity, less is sometimes more. Yet for a full Technicolor exposé, supported to the hilt by rising conducting star Alexander Shelley, and captured  in gloriously lucid sound, there is no doubting its thrilling impact.

On this kind of form, the dream coupling might have been Castelnuovo-Tedesco’s ‘I profeti’ Concerto (another of Heifetz’s ‘west coast’ specialities), with perhaps the Waxman ‘Carmen’ Fantasy thrown in for good measure, but Hope opts for a selection of filmic miniatures by (mostly) European composers working in Hollywood during the 1930s and 40s. Miklós Rózsa (whose stirring Concerto is another masterwork that might have been included here) is represented by love themes from Ben Hur, El Cid and Spellbound, and there’s the rub: all three are magnificent scores heard in context, but excerpted and placed alongside other miniature sweetmeats – no matter how seductively eloquent the playing – makes this an album best dipped into rather than listened to at a single stretch.