Dennis Rooney watches a performance from the University of South Carolina’s 206 Recital Hall, on 31 August 2021 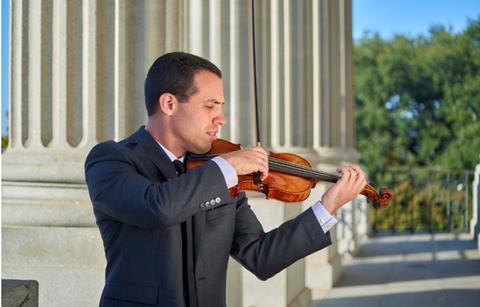 For this faculty recital, Ari Streisfeld (formerly with the Jack Quartet) chose a programme of four works by Jewish composers, all more or less coeval. Streisfeld and Bush played it all with satisfying teamwork and characterisation, although more colour and brilliance would have intensified it. The Suite from Erich Korngold’s 1918 Incidental Music to Shakespeare’s Much Ado About Nothing was the opener, its four movements depicting various scenes: ‘Maiden in the Bridal Chamber’ (opened by lute-like strumming); ‘March of the Watch’ (Dogberry and Verges); ‘Garden Scene’; and a distinctly Viennese idea of a hornpipe.

The 1949 Phantasy by Arnold Schoenberg (who, like Korngold, resettled in California) was heard next. The violin part was written first; however, Streisfeld took pains in his prefatory remarks to claim an equal partnership for the piano, which he said in some ways had the more difficult of the two parts. He and Bush dispatched its single movement with distinctive episodes in a highly assured and authoritative manner. Ernest Bloch’s First Suite for solo violin was written in 1958, the penultimate year of his life. Its linked movements mix rhapsodic style with explorations of atonality. The third movement inhabits a sort of neo-Bachian space.

The Sonate by Rosy Wertheim (1888–1949) is by a composer (descended from an important Dutch banking family) who settled in Paris in 1929, and was acquainted with the city’s leading composers of the 1920s and 30s. She successfully evaded the Nazis during the Second World War by hiding in a variety of small Dutch villages. The Sonate is one of only a few of her approximately 90 works to be published. It bears many Gallic touches in a mostly neo-Classical framework that was pleasing but impersonal.