Luthiers often have more experience than players of Baroque instruments and bows. So, says US bow maker David Hawthorne, they should be fearless in producing authentic equipment to enlighten and inform 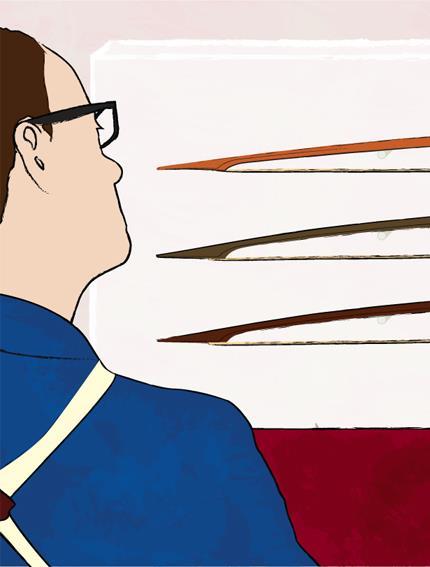 For most of music history, artists and listeners have looked forward, adopting new trends and equipment simply as improvements. In the 20th century, however, as concert music evolved faster than public taste could assimilate it, we increasingly looked back to the Classical and Baroque periods for repertoire.

In the last 50 or so years, we have experienced a revival of Baroque music played on Baroque instruments, or on those made in the Baroque style. In our time, the aim of Baroque performance practice has been to reproduce music as earlier composers might have heard it, using the musical equipment of their time: the instruments, strings, bows and even the concert settings.

The re-creation of this music is, of course, imperfect. There is no way of knowing with certainty the details of gesture and sound that could only be understood by listening to and studying with the Baroque masters. Musical notation tells only part of the story.

So how do we realise the authentic sound of the Baroque? One concrete element is the equipment: instruments and bows. But obtaining the right equipment is not always easy. There are few remaining 18th-century bows left in the world, and almost all of that period’s violins, violas and cellos have been modernised, changing both their tone and their compatibility with early bows. The Baroque bows available to most players of our time are reproductions, authentic to a greater or lesser degree, and this is where careful discrimination is necessary.

The camber, or curve, of the bow in the Baroque era was significantly different from the modern camber. One consequence of this is very different tone and articulation possibilities. But since almost all of us grew up playing on modern equipment, some present-day makers of early-style bows camber them in a modern way. This may make the player feel more comfortable, but it misses the point – the exploration of different tone and articulation possibilities.

In dealing with players, a Baroque-bow maker who has done his or her research carefully will be in a different position from a maker of modern bows. The best Baroque makers will have travelled to see and play as many original early bows as they can, in museums and private collections. When they meet a player – even an accomplished Baroque player – they may therefore have considerably more experience with authentic equipment than the performer. This is in contrast to modern-bow customers, the best of whom have great old Italian instruments and excellent 19th-century French bows, and also have very advanced knowledge of what a modern bow can do.

After all, modern-bow making is the mainstream, and there is a general consensus about how a modern bow – even a student bow – should play. However, there is no such consensus about Baroque bows, so it is up to the maker to ensure that the end product can enlighten and inform the musician.

There are so few good pre-modern bows to copy that we as makers must be very careful, when striving for authenticity, not to reinterpret the best surviving examples. Not all Baroque-bow makers are so careful about this, sometimes changing details and characteristics of the bows they are supposedly copying.

The good news, though, is that Baroque performance in the last couple of decades has evolved to a very high level, and that Baroque players are demanding higher-quality bows and instruments. Consequently, there are excellent authentic bows and instruments being made today. If players search out the people who make them, they will be rewarded with a highly nuanced and satisfying musical experience – much as the performers of past centuries had available to them.

So why should we be so concerned with making and playing historically accurate instruments and bows? Because, if we’re interested, they are the best chance we have, even if incomplete, to answer the question: ‘What did those great composers and players of earlier eras hear?’


First published in The Strad, July 2013. Download the digital edition of the issue here or subscribe to the magazine to get regular features about instrument making.