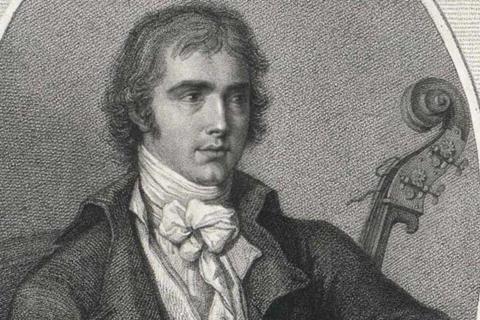 Domenico Dragonetti was Europe's first - and possibly the world's finest - virtuoso double bassist. Born in Venice, the son of a poor barber, he received violin instruction from a local shoemaker, who later persuaded him to take up the double bass. The young Dragonetti demonstrated prodigious talent on his new instrument and at the age of just 13 was appointed to the orchestra of the Opera Buffa in Venice before joining the orchestra of St Mark's five years later. During these years, he discovered the famous Gasparo da Salò bass, an instrument that he would play for the rest of his life. In 1794, Dragonetti moved to London where he was to play operas and concerts at the King's Theatre. Here he met the Italian violinist Giovanni Battista Viotti with whom he would form a close musical relationship as a duo partner. Over the course of his career the Venetian would go onto play before the Emperor Napoleon at the palace of Prince Staremberg, perform with Paganini and meet Haydn, Beethoven and many other great composers. He continued to give major concerts throughout the final years of his life, including as the principal bassist at the Beethoven Festival in Bonn in 1845, only a year before he passed away. His obituary of April 1846 read: 'Dragonetti was the greatest performer of his age on the double bass - possessing the finest instinct of true excellence in all that concerns his art.'