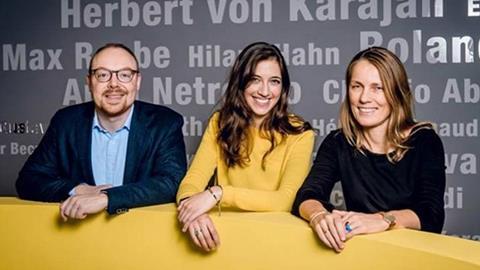 Camille Thomas has signed an exclusive recording contract with Deutsche Grammophon. The 28-year-old Franco-Belgian musician is the first ever female cellist to join the yellow label's artist roster.

'Enchantée', Thomas's debut album for DG, is to showcase works for cello and orchestra by Saint-Saëns and Offenbach and is set for release in autumn 2017. Recorded with the Orchestre National de Lille and conductor Alexandre Bloch, it will also include bonus tracks featuring violinist Nemanja Radulovic and tenor Rolando Villazón.

'There is something truly special for me about recording for Deutsche Grammophon, sharing in its unrivalled tradition, exploring exciting projects and working with other members of its great family of artists,' said Thomas. 'I look forward to building new audiences for cello in partnership with the yellow label'.

A former pupil of Stephan Forck at the Hanns Eisler Hochschule für Musik, of Frans Helmerson at the Hochschule für Musik in Cologne, and of Wolfgang-Emanuel Schmidt at the Franz Liszt Hochschule für Musik in Weimar, Thomas was nominated for a 'Newcomer of the Year' award at the 21st Victoires de la Musique Classique in 2014, and in the same year won the New Talent competition sponsored by the European Broadcasting Union. She has previously recorded two chamber music albums with Swiss pianist Beatrice Berrut and with Belgian pianist Julien Libeer.