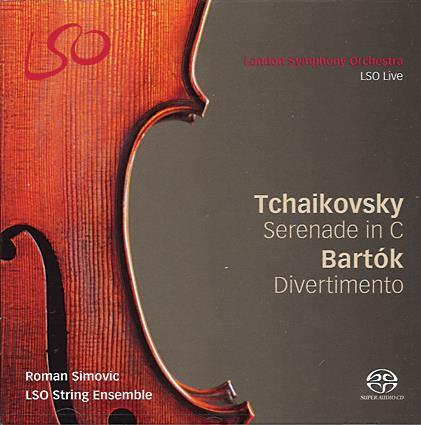 Last month’s Masterclass writer Roman SimoviÄ‡, directing the London Symphony Orchestra String Ensemble from the leader’s chair, brings much pleasure in a polished and poised account of Tchaikovsky’s C major Serenade. The big and bold opening sets the scene, though the performance as a whole is memorable for the subtle dynamic shades in the central movements. If I find the basic tempo changes a little exaggerated as the second movement’s waltz progresses, the central section of the following Élégie flows with silky-smooth affection, and also points up dynamic directions often glossed over. An acceleration in the work’s final bars showcases the ensemble’s virtuosity and brings the work to a brilliant conclusion.

I am more totally persuaded by SimoviÄ‡’s reading of Bartók’s Divertimento, where he resists the temptation to insert rhythmic nuances and has in the score sufficient tonal shades to keep the ensemble’s creativity fully occupied. Only just within the bounds of audibility, the quiet moments are perfectly controlled.

With a catalogue already replete with outstanding versions of both works, my problem in fully recommending this release arises from the rather thick texture and monochromatic recorded sound, taken from concerts in London’s Barbican Hall. The lower strings are well served but it is the tonal brilliance we need from the violins that is curiously lacking.