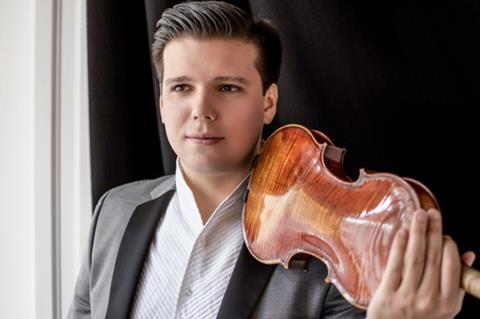 Dogadin is a graduate of the St Petersburg State Rimsky-Korsakov Conservatory, in the classes of Vladimir Ovcharek and Andrei Dogadin. He studied at the International Menuhin Music Academy with Maxim Vengerov in 2012, and completed his postgraduate course at Hochschule für Musik und Tanz Köln, taught by Mihaela Martin, and the University for Music and Performing Arts Graz, in the class of Boris Kuschnir. He continues to study with Kuschnir, who was on the Tchaikovsky Competition jury, at the Music and Arts University of the City of Vienna.

Jasper Parrott said, ’We were very impressed by what we heard in Moscow this past summer, and it was evident that his virtuosity and artistry are complemented by a deep engagement and appetite for music.’

Concert dates for the next season include performances with the St Petersburg Philharmonic and Yuri Temirkanov, and Dogadin has received invitations to perform with orchestras including the Chicago Symphony with Edo de Waart, Royal Philharmonic Orchestra with Vasily Petrenko, and Orchestre de la Suisse Romande with Jonathan Nott.

He plays a 1721 Domenico Montagnana violin.