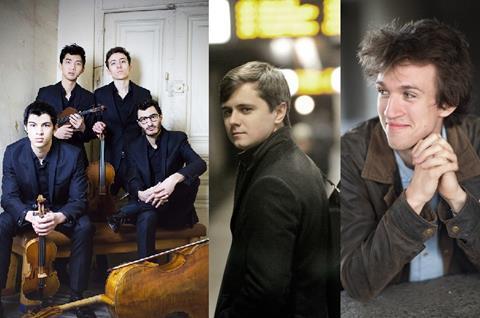 The BBC has announced the 2017 intake to its New Generation Artists (NGA) scheme, a platform for emerging classical and jazz musicians run through Radio 3.

The scheme offers its members a two-year raft of opportunities to perform live and in the studio, work with BBC orchestras and collaborate with other NGAs.

BBC Radio 3 also announced a new weekly programme devoted to the scheme, to run on Wednesday afternoons from 4 October, featuring new material from current NGAs as well as recordings from the archive.

Aleksey Semenenko, born in Ukraine, performed his first concerto with the Odessa Philharmonic Orchestra at the age of seven, and has gone on to play with the Moscow Virtuosi, the Kiev National Orchestra, the Junge Philharmonie in Cologne and the Sinfonietta Hungarica. Through the 2012 Young Concert Artists International programme, he played recitals at Merkin Concert Hall, New York, and the Kennedy Centre, Washington D.C.

The quartet has performed at festivals, including Verbier, Montreux and Aix-en-Provence and is currently artist-in-residence at the Queen Elisabeth Music Chapel in Brussels.

Misha Mullov-Abbado is a jazz double-bassist, band leader and composer educated at Cambridge University and the Royal Academy of Music. He won the Kenny Wheeler Jazz Prize and the Dankworth Prize in 2014 and performs widely with his own group and others and well as composing for other groups.