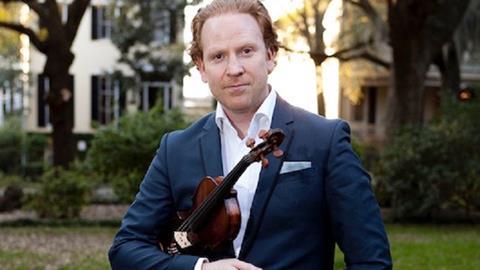 British violinist Daniel Hope has been named artistic partner of the New Century Chamber Orchestra in San Francisco for a three-year term from the ensemble's 2017-18 season. Hope, who currently serves as music director of the Zurich Chamber Orchestra and associate artistic director of the Savannah Music Festival, will direct the orchestra from the violin in a number of performances each season, providing 'artistic continuity' as the orchestra searches for a successor to music director Nadja Salerno-Sonnenberg, who steps down at the end of this season.

'We are delighted that Daniel Hope has agreed to partner with us during this time of transition,' said the orchestra's executive director Philip Wilder. 'Daniel’s creativity and experience as a chamber musician, soloist, orchestral leader and music advocate makes him uniquely qualified to guide the New Century Chamber Orchestra into its next chapter.'

Founded in 1992, the New Century Chamber Orchestra is a conductorless 19-member string ensemble, comprising musicians from the US and Europe, who 'make musical decisions collaboratively'. Hope made his debut with the ensemble in February of this year, serving as guest concertmaster in a centennial tribute to Yehudi Menuhin.

Read: 6 pieces of advice for performers by violinist Daniel Hope