Unlike 2007's anonymous busking experiment, the virtuoso this time announced his appearance in advance 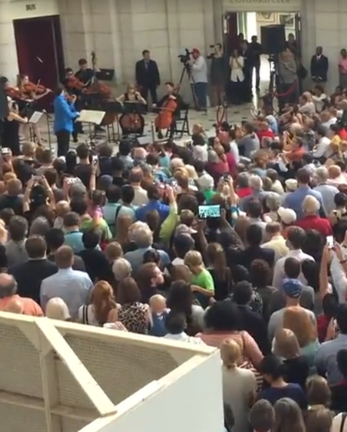 Joshua Bell’s second appearance in a Washington DC Metro station yesterday could not have been more different from his incognito turn as an ordinary busker back in 2007.

Seven years ago when the violinist performed in baseball cap and jeans at L’Enfant Plaza during rush hour, he earned just $32 during the 43-minute experiment for the Washington Post. This time, his pre-announced 30-minute performance in Union Station drew a crowd of hundreds.

‘Wow,’ said a delighted Bell as enthusiastic applause greeted his appearance. ‘This is more like it!’

The virtuoso violinist performed a programme of Mendelssohn and Bach with nine students mentored through the National YoungArts Foundation in an effort to draw attention to the scheme. The event also served to promote a forthcoming masterclass, due to be broadcast on HBO on 14 October, and the release of Bell’s new Bach album with the Academy of St Martin in the Fields.

Watch a video of Bell’s performance below: