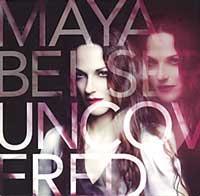 Israeli–American cellist and composer’s muse Maya Beiser has a significant body of work as a recording artist. Her project-based albums have included world music, a visual art collaboration and music by composers from Steve Reich to Joby Talbot. Beiser’s new album, an almost entirely solo set of famous rock songs, is ostensibly a step into crossover, but the reality is a little more interesting. Uncovered, the title of which is a play on the idea of the cover version, features heavy rock classics (Led Zeppelin, AC/DC) and Blues tunes by Muddy Waters and Howlin’ Wolf.

Each song is given a highly individual treatment, on which Beiser worked with composer and clarinettist Evan Ziporyn (with whom she performed in New York contemporary music group Bang on a Can All-Stars). Responsible for all the arrangements here, Ziporyn builds layer upon layer of Beiser’s expressive playing and creates new paths for these often well-known melodies. Most successful are the least bombastic songs (the inclusion of electric bass and drums on some tracks cheapens the arrangements). Beiser weaves a tapestry of acoustic pizzicato and electric bowed riffs on Howlin’ Wolf’s Moanin’ at Midnight while her finely wrought improvisations on Janis Joplin’s own cover of Summertime recalls Joplin’s own abandoned vocal delivery.