The advantages of modern instruments 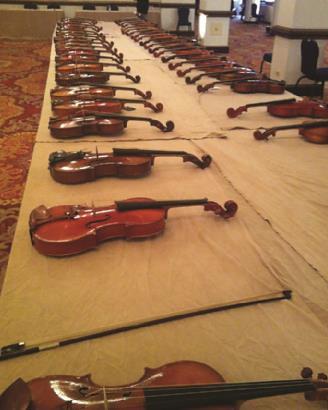 As part of the recent London International String Quartet Competition, I chaired a panel discussion with makers John Dilworth, Andreas Hudelmayer, Kai-Thomas Roth and Tibor Szemmelveiss. Here is a transcript of the conversation we had.

AT: Why should a player think about buying a modern instrument?

AH: It comes down to what playing power you get from your money and in my experience if you’ve got the typical budget of somebody who hasn’t just won the lottery then you will get a lot better playing instrument if you choose a good modern maker than if you go for what’s in your range in old instruments. You will need a big budget to find something that plays very well in an antique.

JD: It’s not to be underestimated, the business of making an instrument for a player. The player has the chance to direct what happens on the bench and specify what kind of instrument they like and want in every way and choose the right instrument for themselves. And they can have a relationship with the maker that can go right through their whole career and know that they can always go back to the person who made it if there are any difficulties.

AT: How does the relationship with players work?

K-TR: The relationship with the maker is the biggest plus point apart from how the instrument performs because the player can come back for the lifetime of the maker and you always have the person who has at the heart of their interest to keep that instrument performing at the best of its possibilities. I offer all my customers to come back for adjustments. Not all of them do, but those that do profit from it, and I profit from it because you learn every time you adjust your own instrument or you look after the instrument with the player because you learn about individual needs and ideas that players have. That is one big difference as opposed to old instruments that you buy from an auction house or a dealer. Of course they offer certain things as well, but a maker who knows his instrument inside out can probably suggest a lot of more when you change.

AT: What should a player do if they want to commission an instrument?

JD: Come to me, none of this lot. But seriously, visit as many makers as they can and make contact with players who have new instruments, find out where they come from. The nice thing for me is always word of mouth. Nobody commissions an instrument on some recommendation they’ve read third hand. In orchestras they spend a lot of time talking about each other’s instruments and if someone appears with a new one that seems to work really well they’re soon all talking about it. It’s the same within the student community.

AT: One of the things that is often said about new instruments is that it takes so long to play them in that you don’t know what they’re going to end up sounding like compared with old instruments where you already have an idea. How do you feel about that?

AH: It always sounds as if the playing in process is finite but you can never decide when an instrument is finished playing in. A new instrument will settle in the first year and will need a lot of adjustment but this is not something that’s unique to new instruments. In my experience the basics of the sound and the playability of the instrument need to be there from the first minute and it should never be an excuse if something doesn’t work in the beginning, ‘Oh, just play it for ten years and it will be fine’. That’s just a big excuse. But yes, you should be prepared to come back to the maker regularly, certainly in the first three to six months. I try not to give instruments out for more than a few days before they’re a few weeks old, because then already a lot of the settling has happened and I will have adjusted it many times. But sometimes I have to give the instrument out earlier which means the musician will have to come back. It’s important that the musician comes back realising that it’s a normal part of the process, that it needs to be taken care of, rather than thinking the instrument isn’t good any more. If you have a Stradivari and one day you find it doesn’t sound as good as it used to, there are very few people who would decide that Strad was not a good maker. You immediately go back and see if you can get it adjusted and the same applies to new instruments. Whether that’s in the first year when that needs to happen a lot more, or later on in life, occasionally you might still need to have it adjusted. I think it’s very important not to blame the instrument and to go and get it looked at.

JD: I wouldn’t want to over-emphasise it as an issue. I have a foot in both camps: I do a lot of restoration of old instruments and I make new instruments and when you’ve finished a restoration of an old instrument it takes just as much playing in again as a new instrument. People worry about this playing in of new instruments more than they need to. A lot of it is a hangover from previous generations of violin makers. We’ve learnt a lot in the last 20 or 30 years and what is being done now in the field of violin making – this may sound bragging – a lot of solid advances have been made, in terms of going back 200 years and reclaiming what was being done in Cremona then. New instruments today function much better and play in much better, and have a more mature sound in the beginning, in general, than instruments that were being made earlier or later in the last century.

KT-R: I say to my customers that if you don’t substantially hear in the instrument what you want to hear in it from the beginning it’s not going to suddenly miraculously develop. It has to be there. If it’s not there it’s not the right instrument for you. That’s a reassuring statement, rather than saying, ‘If you don’t quite like it then you’ll get used to it and eventually it will work for you.’ That is leading them up the garden path.

AT: What do makers learn from classic instruments?

AH: The best of the classic instruments are the best-sounding and aesthetically very good aims for us to match but at that point I’d like to emphasise that it’s the best examples of that period of making that we hold in high esteem and often it’s applied to anything that’s old and Italian. I’ve come across lots of old Italian violins, some even with relatively famous names, and there’s nothing to recommend apart from the name. Unfortunately there are many more of those instruments than those that we are keen to copy. It’s important for people to remember that not everything that is old and Italian is worth copying.

JD: The reason why a lot of old instruments are good is that they’ve been worked and reworked and developed for the whole of their lives. They might have started off as something relatively crude but because they had value generations of restorers and makers have refined them, tuned them and adjusted them, and eventually they find their voice through the work of succeeding generations of players who put their energy into them and restorers who regraduate and adjust them. Everything we do we have learnt from Stradivari and Amati – there’s no getting away from that. They were the best at what what