How do you spot when a young student has chosen the wrong instrument, and how do you find out which would suit them better? Pedagogue and author Mimi Butler takes a look at the issues involved 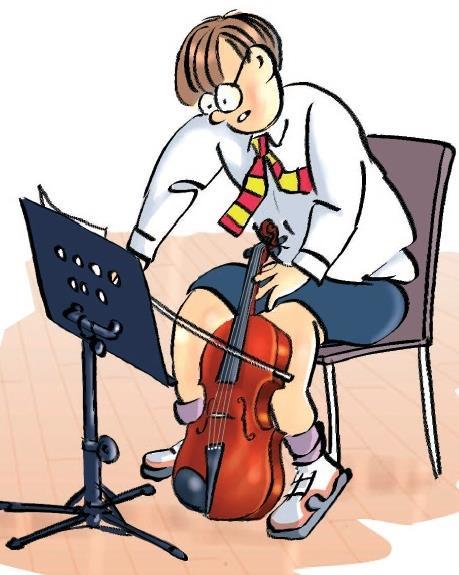 Often a young student needs to shine and the instrument they are playing just isn’t making it happen. They can become bored, unmotivated, discouraged and unhappy. As time goes on, the student tells the teacher they want to quit. But quitting may not be the best option, particularly for children with parents who expect them to play an instrument. In these cases, why not offer them the chance to switch to another string instrument? Knowing how to play one string instrument makes it easier to play another.

I have often switched students from violin to viola because they wanted to be ‘needed’ rather than one of a big group. This is a common occurrence. Performing opportunities are often greater on the viola, cello and double bass than on the violin.

I myself was more motivated as a young musician to sit in the front of the viola section than in a sea of violins. Tammy Schnitt from West and Southwest middle schools in Rapid City, South Dakota, says: ‘I found a student who was a good violinist but probably not good enough to sit in front. The competition wasn’t as stiff in the cello section and the student worked hard to be the best in the section. First chair was the motivation.’

The student may believe that there’s a better chance of receiving an educational scholarship or audition for an orchestra if they switch instruments. It may be simpler to gain entrance into a youth orchestra or a district or regional group on the viola, cello or bass than on the violin. This is a wonderful reason to switch.

The teacher may need more violas and cellos to balance the group. Look around and see who might be a good candidate. Look for the students who were once happy playing their instrument, but are no longer. There may even be students who are awkward playing their instrument: when they started the violin it felt right, but as they have grown it has become uncomfortable. These students may be the perfect candidates for a larger instrument. Admit to the students that you need more violas, for example, and ask who would like to switch. You may be surprised at how many students are just waiting to be asked.

On rare occasions a parent may decide that the student should switch, especially if the family finds itself financially unable to rent the instrument and it becomes necessary for the child to study whichever instrument is available to borrow at school. More often, however, it is the student’s idea, or the teacher’s – or both. Unfortunately, sometimes a switch may be ill-judged. Elton Masaki, from Mid Pacific Institute School of the Arts in Honolulu, Hawaii, had a six-foot-five-inch violin student with huge hands, ‘and the violin just wasn’t working for him.’ ‘I offered to teach him to play the viola. He did play the viola better, but didn’t like it because he felt the orchestral parts were too boring. Then he quit. I always felt badly because maybe he really wanted to play the violin.’

At the start of a school year or during the summer before school starts is the ideal time to switch. It can take anything from one to three months for a student to learn a new instrument, so after the winter concert or during a holiday break is the second best time of year.

HOW TO MAKE THE SWITCH

Start with the notes of the new clef (if necessary) and use the beginners’ method book, with which the student will feel comfortable.

After you have taught the new notes, make sure you set up the student’s right and left hand. Spend a lot of time on this; it is the most crucial part of learning the new instrument. Betsy Maliszewski, who teaches in a West Orange, New Jersey, elementary school, says that the most troublesome aspect is with the bow hand when the student goes from high to low strings. Maliszewski advocates separating right hand and left hand before putting them together.

There are many technical factors to consider. For example, the tone varies from instrument to instrument. The larger the instrument, the larger, richer and heavier the tone. This is accomplished by adding weight and bow speed. The weight starts at the right shoulder going through the elbow to the first finger.

‘Going from violin to cello has been an interesting experience to watch,’ says Masaki. ‘The hardest problems were learning the new clef, getting accustomed to the new bow grip and playing with straight instead of slanted left-hand fingers. Also, bowing on the cello is backwards of the violin – you raise your arm to play a higher string and lower it to play a lower string, which is exactly the opposite of the violin.’

The right hand position can take the greatest time to adjust on all four instruments. My favourite trick is to use corn cushions (small-size are best), placing them where the thumbs are located on the instrument and bow. This helps violinists, violists and cellists to curve their thumb into the frog of the bow. I also use them on the necks of all the instruments to help with left-hand thumb placement. I start my students on their new instruments with dots or tape on the fingerboard for note placement. They can take them off when they feel ready; if they wish, they can remove them one at a time.

Finger spacing is a challenge as the instrument gets larger. When switching from violin to viola, the student has to spread the fingers more and it can be uncomfortable at first. This spread is even greater on cello and bass. Plus, the beginning student needs to shift into a higher position earlier in the learning process on the cello and bass.

Another challenging adjustment for the student may be the size of the instrument. For a violinist, the viola is heavier and awkward to hold. I use a muscle weight strengthening exercise called ‘hold it and count’. The student holds the viola with the correct left-hand, arm and elbow position for three to five minutes and watches the clock. The viola can be shifted a few degrees to the centre of the body to compensate for the large size.

I have had many successful examples of students switching. You can offer incentives. For instance, if they switch successfully by a certain time they can sit on the first desk of the orchestra or play a solo or duo at the next concert.

Karen Higdon from Daviess County Public Schools in Owensboro, Kentucky, says: ‘I had a bouncy, excitable, lovable seventh-grade violinist who just didn’t understand the instrument. Note reading was a mystery, and tone quality was, well, I won’t say. A new student joined the class on bass and another one of his friends was a cellist. My student was round and short with short fingers but wanted to try the bass. I stayed after school with him one day. We started with the bass, but he couldn’t really get around it, and shifting scared him off. I put a cello in his hands and within 20 minutes he could play several songs and loved it.’

‘My son switched from cello to bass in tenth grade and is now a senior bass performance major,’says Maliszewski.

Masaki cites the example of a student who switched to cello after two years of violin playing. ‘He said he didn’t like playing the violin because it was too small and screechy. I didn’t start him in the middle of the year; instead, he signed up for the beginners’ orchestra this year. At the start of the year, things were hard. He had a tough time getting used to the fingering system and posture. The bow hold was also tough for him to learn. It probably took about a month or two to get things settled, but once that happened, his playing took off. Some people might say it’s strange having a freshman in a beginners’ class of mostly seventh graders, but he has inspired the whole class to get better.’

DOS AND DON'Ts OF SWITCHING

— temporarily lower your expectations for testing

— be patient – expect frustration from the student

— pick students who have been successful at their current instrument

— contact parents, especially regarding rental, purchase or borrowing of the alternative instrument

— invest time in the left-hand and right-hand set-up

— ignore frustration due to carting of the instrument

— allow a student to switch on their own

— discourage any student from switching

Read: Teaching a stringed instrument you have never played before

This article was first published in The Strad's June 2006 issue."