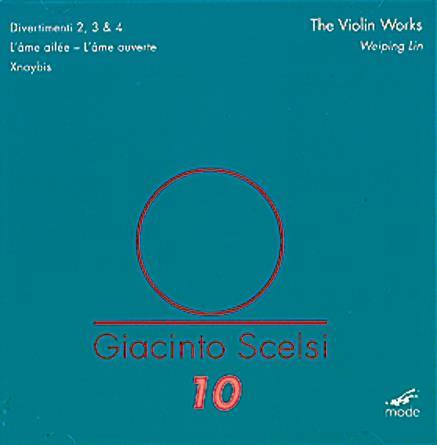 Record label Mode has been careful not to call this fine release the ‘complete’ solo violin works by idiosyncratic 20th-century Italian composer Giacinto Scelsi (1905–88): the Divertimento no.1, among other probable works, has never been discovered among the chaos of his archive. Yet from what remains, Vienna-based violinist and contemporary music specialist Weiping Lin has created a beautifully structured, incisive and dramatic disc that brings a sense of elegance and naturalness to the composer’s often remarkably strange music.

The strange pieces, of course, are Scelsi’s later works, which obsessively explore the properties of single notes, sliding in and out of microtonal inflections and minute tonal variations – each of which becomes a moment of high drama in Lin’s gripping readings. Indeed, she perhaps over-dramatises in the first movement of L’âme ailée – L’âme ouverte (1973), but the contrast with her veiled, whispering second movement is revelatory. And she shows remarkable control in the fearsome technical demands of Xnoybis (1964), producing a mesmerising account that seems to illuminate pitches from different perspectives.

Lin alternates the two later pieces with agile performances of Scelsi’s early divertimentos, slipping in and out of their references to Romanticism and folk music with ease and wit. Her vibrato is clean and responsive and her phrasing immaculate, and she’s a passionate advocate for all the disc’s varied music. Recorded sound is close but surprisingly resonant.