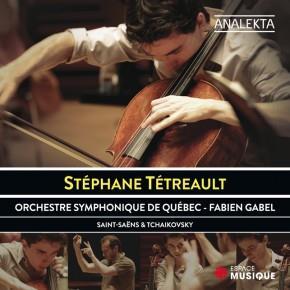 If you are fortunate enough to study from the age of nine with a marvellous cellist (the late Yuli Turovsky), have a great instrument on which to play (Bernard Greenhouse’s Stradivari) and are partnered by an excellent orchestra with sensitive and subtle conducting, then the auspices are good. Add to that a clearly natural talent and hard work, and you have the impressive package that is revealed on this clear and warm recording.

There is really little to criticise in Stéphane Tétreault’s playing – he is technically commanding yet musically stylistic and sensitive. His vibrato and tone are varied, his bowing techniques immaculate and his awareness of harmony and consequent shadings omnipresent. Granted, the pieces are well-worn chestnuts, but even so it is nice to have them brought together – the ubiquitous Swan is given a sumptuously refined performance and the Allegro appassionata is full of verve. It is particularly good to have the poor cousin of the Rococo Variations included – the Pezzo capriccioso teems with vintage Tchaikovsky melodies.

Throughout all the works, the orchestral components are well shaped and pointed, while exhibiting flexibility in accompanying the solo line. Fabien Gabel has also paid great attention to texturing, with the Saint-Saëns delightfully Classical in timbre.