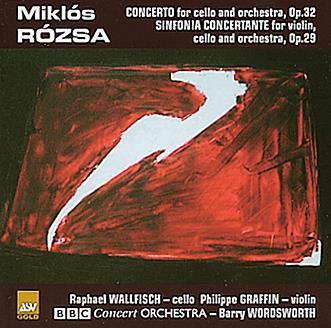 For all his success as a film composer (he won three Academy Awards), Miklós Rózsa throughout his long life set great store by his ‘serious’ music. Although trained at the prestigious Leipzig Conservatory during the 1920s, Rózsa never forgot his Hungarian roots, as can be heard clearly in the two works included here, both reminiscent of Magyar folklore.

The Sinfonia concertante was written in 1958 at the instigation of Gregor Piatigorsky, as a vehicle for himself and Jascha Heifetz (who had himself commissioned Rósza’s Violin Concerto three years earlier). Brendan Carroll’s excellent booklet notes amusingly recall the soloists’ complaints about the other one being favoured with extra solos. (Eventually, Heifetz and Piatigorsky did play the piece and recorded its slow movement, as ‘Theme with Variations’, albeit in a reduced orchestral garb.) If there was any jealousy between Graffin and Wallfisch, it certainly doesn’t show in this brilliant performance, which has nothing to fear from memories of the work’s dedicatees. They achieve chamber music-like intimacy in their closely intertwined parts, while sacrificing nothing in soloistic brilliance.

The Cello Concerto was commissioned by János Starker in 1967, during Rózsa’s short-lived retirement from Hollywood chores, and premiered two years later in Berlin. Starker worked with Rózsa on the solo part, and he certainly didn’t spare himself. Wallfisch copes well with the dizzyingly virtuoso writing, emerging with hardly a hair out of place. The recording balance has him much more forward in this piece, somehow to the detriment of orchestral detail. However, Barry Wordsworth and the BBC Concert Orchestra make the most of Rózsa’s colourful palette.