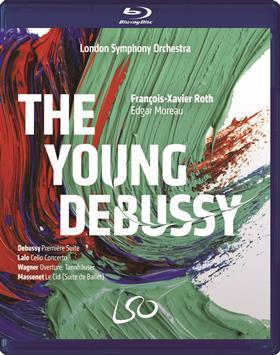 Filmed on 21 January 2018 in London’s Barbican Hall by a mainly French production team, this recording, especially in the Blu-Ray format, boasts pin-sharp picture quality and unusually fluid camera-motion. These are complemented by undistracting editing between a wide range of viewing angles captured from around and (seemingly) inside the ranks of the London Symphony Orchestra. The naturally balanced, gently cushioned sound is streamed in PCM stereo with no native surround option, although most home cinema amps will happily convert the signal up to 5.1 and beyond, depending on your set-up. The LSO plays with assured virtuosity, immaculate ensemble and spotless intonation throughout, under the watchful, gently encouraging, batonless direction of François-Xavier Roth, even if there isn’t much fire in its collective belly on this occasion.

For readers of The Strad, the main point of interest here is Lalo’s Cello Concerto, played with ravishing tone and seemingly effortless technical command by Edgar Moreau, who makes light of the solo part’s occasional awkwardness. Most striking is Moreau’s eloquent phrasing and radiant cantabile – by imbuing this colourful score with a gentle nobility, it sounds more elegantly crafted than usual. The livelier moments of the outer movements might arguably have benefited from a greater sense of rhetorical drama, but the Bach encore (the Sarabande from Suite no.3) is delectable.