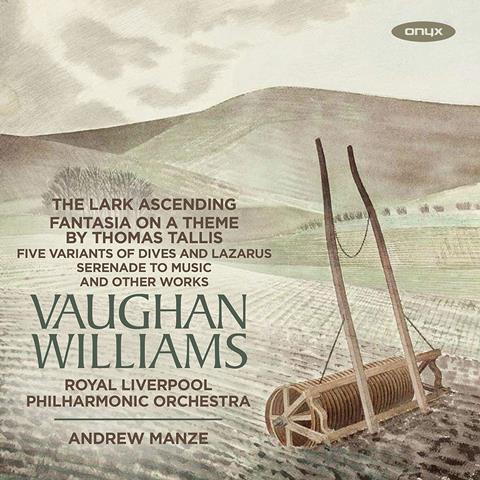 This is the latest in the Vaughan Williams series that Manze and the RLPO are making for Onyx. It includes The Lark Ascending, although soloist James Ehnes is not credited on the front cover, presumably because this track had already appeared on an earlier CD. His Lark is a sweet-toned bird that sings with a fruity lower register and subtle dynamic grace when he ascends to the melismatic heights. Before it takes off, there are the Five Variants of Dives and Lazarus which grow from hushed reverie through subtle increases in vitality to a fine, spirited climax in Variant II. After the severity of the two-part counterpoint at the end of Variant IV, the final Variant is gloriously lush, before sinking to its gentle ending. The string soloists play beautifully but are uncredited; perhaps they’re the same as those in the Tallis Fantasia. This has an underlying propulsion that carries through its limpid beauties to the great release of the climax.

The string playing on this CD is tremendous. All the lines, phrases and paragraphs have a natural shaping, an ebb and flow and a sense of continuous unfolding which is somehow quintessentially string-like. The rest of the RLPO is fine, too, in these compelling, warmly recorded performances.