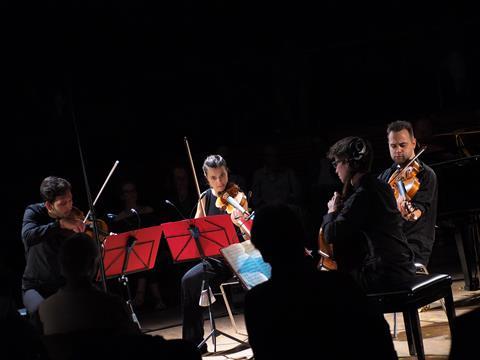 Performance by the Adelphi Quartet

Wir finden statt! (‘We’re happening’) was the joyful motto of this year’s Summer Music Days in Hitzacker, a charming town on the River Elbe that for 75 years has quietly been hosting one of the most enterprising chamber music festivals in all of Germany. Cancelling the jubilee season wasn’t an option for its general director Oliver Wille, who came up with an exemplary Covid-compliant concept. Seating was redistributed to accommodate 150 socially distanced listeners, and concerts were reduced to one interval-less hour, the starrier ones being performed twice.

Thus, Isabelle Faust played an exacting programme of unaccompanied Bach and Kurtág twice over with barely a 45-minute break, even throwing in a different encore each time! Faust’s Bach was an object lesson in voicing. The ‘walking’ accompaniment in the A minor Sonata’s Andante was given a contrasting colour to the tune that hovers over it. The fugal movements, here and in the C major work, offered a beautiful balance of formal strength and lyrical freedom, Faust finding ever different ways of breaking the three- and four-part chords. In the Kurtág group, she exhibited crystal-clear harmonics and a healthy dose of Hungarian fire.

The Kuss Quartet, of which Wille is a member, presented an equally challenging mixture of individual Beethoven quartet movements and alternating percussion pieces from Johannes Fischer. The players achieved some magical transitions between, say, the Scherzo from op.131 – complete with an unscripted ponticello ending – and Fischer’s Studie, before making both sound worlds meet in the Presto from op.130 – which was invaded by some sound effects I won’t spoil! With strong leadership from leader Jana Kuss, the opening movement of op.18 no.6 was daringly characterised with some extreme agogics. Bruno Mantovani’s Beethoveniana, an amusing romp through Beethoven’s quartet oeuvre and a Kuss Quartet commission, completed the concert.

At a series of moderated talks labelled ‘Listeners’ Academy’, Eberhard Feltz – the Kuss Quartet’s first mentor – spoke fascinatingly about Kurtág’s Officium breve, with his former charges on hand for live musical examples, while another session saw the Signum and Adelphi quartets comparing their interpretations of Haydn’s op.20 no.2 in lively discussion. Violinist Bomsori Kim gave a delightful recital with Thomas Hoppe, incorporating Beethoven’s ‘Spring’ Sonata and capped by coruscating showpieces by Szymanowski and Waxman. I also enjoyed a sensuously beautiful late-night concert with Nils Mönkemeyer (viola), Sabine Meyer (clarinet) and William Youn (piano), which included the usual suspects by Bruch, Schumann and Mozart. While I had to miss several mouthwatering programmes, I left feeling confident that the Summer Music Days – not for the first time in their 75-year history – are showing the way ahead.