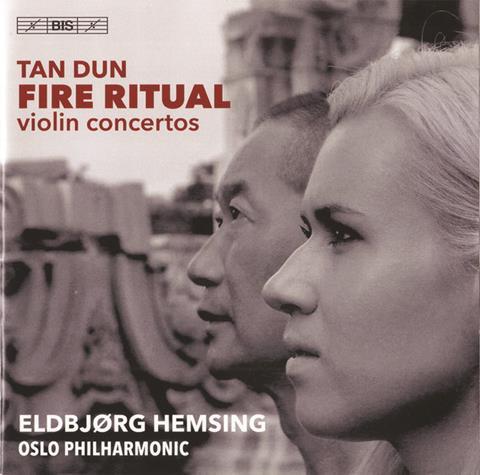 Theatrical, charismatic and intricately detailed, these two violin concertos by Tan Dun are the perfect showcase for his sensuous sound world (see April 2019).

As a teenager Tan became the conductor of a travelling Peking Opera troupe: echoes of its colourful style are never far from his delicate textures, recorded here with brilliance and vibrancy.

The first concerto, ‘Rhapsody and Fantasia’, grew out of an ancient opera melody. From this, Tan conjures an eclectic but immensely likeable work that somewhat improbably pits dance-worthy beats (in two movements entitled ‘hip-hop’) against a rich seam of lyricism from the violin.

Under the baton of the composer himself, Norwegian Eldbjørg Hemsing shows a deep affinity for this music, from the lush, yearning lyricism of the Rhapsody’s middle-movement Malinconia to the more esoteric Fantasia, in which lovely pinpricks of orchestral detail add shade to the violin’s searching lines.

The five-movement ‘Fire Ritual’ of 2018 builds on the earlier work’s sense of ceremonial, the violin pitted against the war-like, powerfully expressive declamations of the orchestra.

After the brittle march of the third movement, the tumult clears for the solo violin to emerge. The shared, gorgeous melody of strings and soloist in the fourth movement gives way to a final, sorrowing melody from the violin, perfectly judged by Hemsing: a haunting end to a compelling disc.